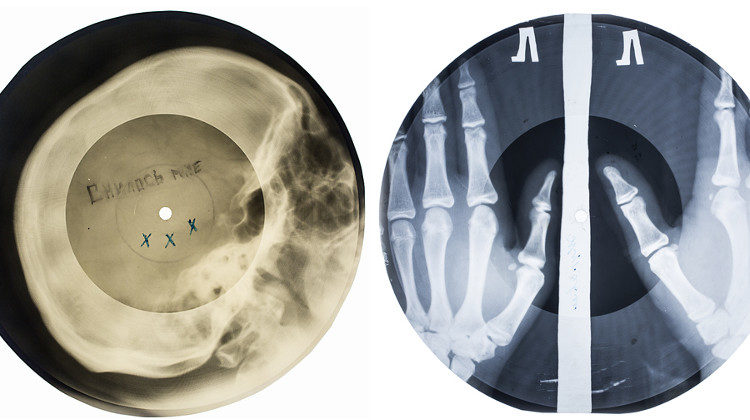 We speak to Stephen Coates about the fascinating history of X-ray records, music that’s been directly recorded onto discarded X-rays in the Soviet Union.

“It didn’t seem to matter because this was the music that people loved, not the music they were being told to love.”

Many of us are lucky enough to be able to listen to and perform music freely; music that expresses itself with no filter or censorship and is unafraid to touch on any subject. When Stephen Coates, (musician, musical curiosities curator and co-founder of X-ray Audio Project) found an item that showed what it would have been like if this freedom was taken away, it was always going to pique his interest.

He found the item in a Russian Flea market back in 2012 and just couldn’t get his head around it. It appeared to be a record etched onto an X-ray image. Why? When? How? These were just a few of the questions running through his mind that led him to delve into the past history of this strange object. “At the time, when I started to research this story and write about it, it just got a huge amount of interest from music lovers. Encouraged by that we just kept going with it. That’s how it grew from being one record I found in a flea market to what it is now.”

To fully appreciate what he’d found, through his research Stephen was led on a journey back to the Soviet Union in the 1940s: “It’s the cold war era, it’s a time of real cultural repression. Stalin is at the height of his powers and all culture was subject to a censor, whether it be literature, drama, graphic design, painting, poetry, or music. The censors decided that if the content of any cultural offering was not ‘on message’ for socialist realism then it would be forbidden. This had been going on since the early 30s but it really reached its height in the 40s. Lots of music started to get banned. The obvious stuff was western music and American music because of the cold war, but also huge amounts of Russian music started to get banned for various and often quite strange reasons.”

Russain musicians such as Vadim Kozin were forbidden for not being ‘in line’ with the current regime, with the composer eventually being sentenced to five years in jail. Earthy, Russain-folk music was also banned; songs about life in the Gulag (forced labour camps) and hardships that were deemed as ‘off-message’ were not welcome.

People felt restricted, constrained, and had something taken away from them that they loved. This leads us to the birth of ‘X-ray records’ or ‘bone music’:  “In Leningrad, a small community of people grew up who were quite technically savvy. They managed to get hold of a recording lathe, the sort of machines that were used in the west by the BBC or by journalists to make recordings to disc. They managed to get hold of one of these machines and started to copy them and build their own.”

But why use X-rays? As always with the human race, out of hardships and necessity, ingenuity is born. “They couldn’t get access to the usual blank media that was used in the West, so some ingenious soul came up with the idea that you could record from photographic film. X-ray film seemed to be very good at holding the grooves. Most importantly, it was very easy to get hold of. All hospitals had been charged with getting rid of their used X-rays within a year because X-ray film, at that time, was very flammable; when it got old, it could spontaneously combust. It was a fire risk. The people making these X-ray records could do a deal at the hospitals ‘after dark’ for a few roubles or a couple of bottles of vodka and come away with a whole stack of used X-rays. They would then use these homemade record lathes to make their own records, copy forbidden music, record radio broadcasts from the West, and even record live music.”

These X-ray records began developing into an underground movement that helped give people at least a little sense of identity back, something the Soviet Union and Stalin had taken away. Starting off with people cutting music for themselves, this gradually expanded into these talented individuals making records for others and money for themselves at the same time. “They started to sell them as other people became interested. It started to spread out from these tight-knit communities and into the broader culture. A little bit later on in the 50s, there was a Soviet youth culture group called ‘Stilyagi’. They were kids that liked swing and jazz and liked dressing up in an American style, speaking in American accents and smoking American cigarettes. They would meet in secret or at least very privately, also listening to music.”

In today’s world, the music we listen to is usually of extremely good quality. High-end streams, digital downloads and audiophile systems allow us to enjoy music without any crackles, pops or fuzz. But as you’d expect, listening to music on a discarded piece of X-ray came with its limitations. “The quality massively varies. A lot of them sound terrible. Some of them did sound great though. I’ve got one with a rare American rock ‘n’ roll tune called Big Guitar – I still don’t know who it’s by. It sounds amazing, even though it’s on a really thin piece of X-ray you can hardly see the grooves. The person who made it not only had good taste, but they also had quite a lot of skill in using the cutting machines. A lot of it came down to the skill, the quality of the x-ray film, and the quality of the machine. Whether they cared was also a big factor. For instance, I interviewed an old guy who used to be one of these bootleggers. He took lots of pride in making the best possible recordings that he could. He also said a lot of the other bootleggers were just interested in money and would just put out any old shit, not really caring about the quality. It really varies. The ones we’ve got now often sound terrible, but it might be that they’ve just been played a lot and have deteriorated. We try not to play them more than once and record from them instead.”

The X-ray records Stephen has found and compiled are now part of an on-going travelling exhibition that you can find out more details of over at the X-Ray Audio website. These records help show us the lengths that people will go to for their freedom. Whether it be freedom of choice, freedom to walk and talk to who you wish, freedom to fight for what you feel is right or freedom to listen to music, people will always find ingenious ways to be free. This ‘bone music’ helps remind us that music isn’t always about the sound quality, but what it can mean to the people that are listening.

Over at the X-ray Audio website you can also check out Stephen’s Ted-Talk based on the subject, marvel at X-ray record images taken by co-founder Paul Heartfield, and find links to documentaries based around this fascinating subject.