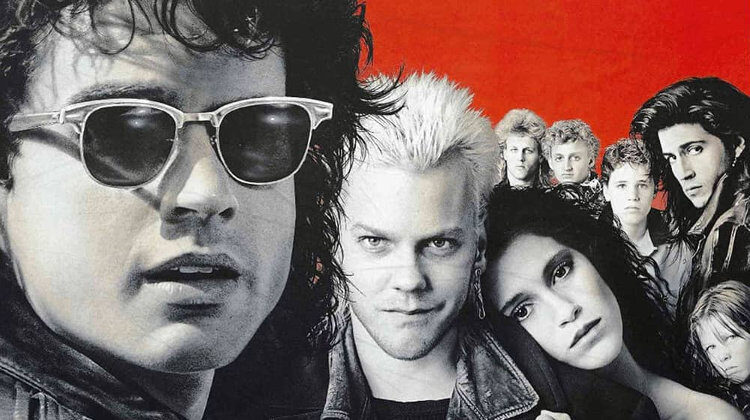 Matthew Wand delves back into the ’80s to revisit the soundtrack of cult movie classic, The Lost Boys with the vinyl reissue released this month.

Officially, I hate the 80’s. I know, it’s a bold statement. The excess, the indulgence, the fashion, the haircuts, for the most part, the cinema, and especially mainstream music. Music that was overproduced, compressed, shotgun snares, drum machines, synthesisers, and musicians that exuded all the excess, indulgence, fashion, and hair that I loathe so much. But, with all rules in life, there are exceptions and 80’s movie soundtracks are one of them.

On 31 July 1987 Warner Bros released the comedy horror film, The Lost Boys. The movie featured the infamous Corey’s (80’s actors Corey Haim & Corey Feldman) and Kiefer Sutherland in starring roles. The plot was a classic teenage coming of age tale… with vampires. On the same day, Atlantic Records released the Original Motion Picture Soundtrack.  A ten track LP boasting some star power with names such as Roger Daltrey, INXS and Echo & the Bunnymen. On top of this, everything would be overshadowed by a virtually unknown British songwriter and his gothic theme for the movie…

In 1987, music was slowly starting to change. Alternative rock was slowly bubbling away on the surface of the underground scene. The early nineties music revolution was still four years away, so there was no sign of that, but this soundtrack managed to bridge the gap of  eighties goodness.

The OST opens with Good Times by Jimmy Banes and INXS, a cover version of a 60’s song by Australian band The Easybeats. Keeping faithful to the original the spin is an upbeat rock n’ roll number that gets your feet tapping and head nodding, not the feeling you’d expect for a gothic vampire flick.

The second track starts up with an unmistakable 80’s drumbeat and keyboard riff. Lost in the Shadows has the feel missing from the opener.  Foreigner frontman Lou Gramm’s intense vocal style is perfect on this track especially when he hits the chorus “Say a little prayer tonight, lost in the shadows” and the haunting backing whisper of “Lost Boys” Shivers and Goosebumps.

Roger Daltrey of The Who fame is up next with the Elton John penned slow ballad Don’t Let The Sun Go Down On Me, fitting in perfectly with the overall sound… we see what you did there Mr. Daltrey. Before we hit the crescendo of The Lost Boys Soundtrack, Liverpool rock band Echo & the Bunnymen treat us to a perfect cover version of The Doors hit People Are Strange. Like the opener, this version is a tribute to the original track and sits well with the comedy-horror vampire theme.

Track six is here… the BIG one. The song everyone remembers from this film and has been the anthem of Halloween parties since 1987. Cry Little Sister by Gerard McMann is the leader of the pack, the head vampire in this collection of songs. Its moody and emotionally evoking tone can stir life into the very dead. The rhythm is hypnotic with a heartbeat drum track and a constant bassline. The guitars and synths dart in and out like the strikes of a rabid animal. Mcmann, an unknown writer, producer, and performer, has created a track that captured the atmosphere and narrative of the film it was written for. The chorus line is sung with love and anguish “Cry Little Sister come, come to your brother” while angelic choir sing “Thou shall not fall.” As quick as Gerard steps into the light with this brooding ode, he steps back into the shadows.

The Lost Boys Original Motion Picture Soundtrack is typical of its time, but within it are some truly great songs that transcend the decade and stereotypical formulaic composition of the ‘80s. Heck, even those tracks that don’t are great with the synths and saxophone solos. I opened this review by saying I hate the ‘80s but clearly this is all a placard, a cloak I’m shrouding myself in. Like many other OST’s of the period – Top Gun, Dirty Dancing, and any Rocky film – The Lost Boys captures the tone and frames the movie perfectly. The two have a symbiotic, cult status in pop culture and like the undead children of the night, will live forever.