Home » articles » The Big Moon: Walking Like We Do – Review 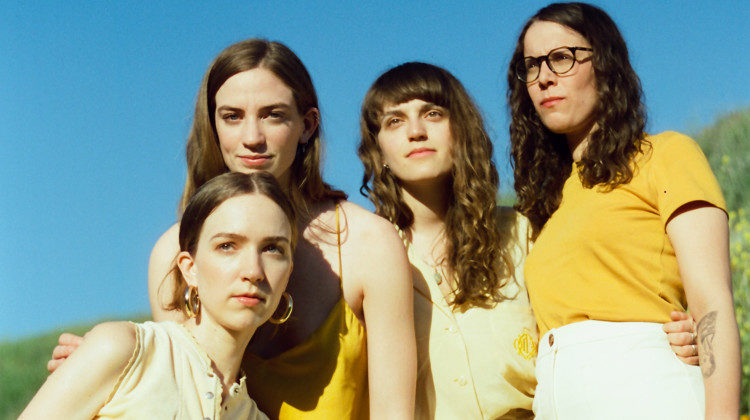 The Big Moon return with sophomore album Walking Like We Do, switching things up with thought-provoking tracks amongst a deeper sound.

Most bands are careful with their second album. Fearful of alienating their fan-base with change, the majority stick to the same script as their first record and hope to find something new and interesting within a similar sound. The Big Moon, however, have thrown caution to the wind with new record Walking Like We Do, showing off a more complete range for the band and focusing on strong melodies and rich vocals that allow the tracks to breathe and portray powerful messages.

It’s Easy Then starts off with the more piano and vocal-led atmosphere that this record takes in its stride. Fans of the first album can still feel the band’s lasting effect here, however, and it doesn’t take long to fall in love with the new sound. Juliette Jackson’s vocals feel more tailored and stronger than previous efforts, working well with the added harmonies, gently rising riffs and floaty atmosphere. The track throws off a sense of impending doom amongst the confused societal structures of the present world we live in – a theme that runs through the roots of the record.

Lead single Your Light carries on in the same vein, using even more prevalently layered vocals that form an instrument within themselves. One of the more rocky tracks on the record, the drumbeat pushes forward amongst serene synths and a leading bassline. This is accompanied by catchy lyrics that feel like a mix between Karen O and Courtney Barnett; more than just throwaway lines and ones actually stick in your head: “We just hang around like a haircut growing out”.

As we are taken by the hand and led deeper into the record, the atmosphere can get more heavy and intense than we’ve ever heard from The Big Moon before. Dog Eat Dog pulls on themes of social injustice whilst being focussed around the Grenfell tower tragedy in London. This works seamlessly with gentle piano and spacious vocals creating serene but haunting tones. Waves manages to turn into one of the emotionally strongest tracks on the album with some of the best vocals hellbent on purveying honesty, sincerity, and pain in quick succession.

What the band have done well throughout is recreate themselves but still keep that sense of band camaraderie throughout the lyrics and catchy rhythms. Barcelona portrays a sense of ‘age and wisdom’ in one of the more jaunty and guitar-led tracks with Jackson managing to switch with ease between emotional and serene to the uplifting and vibrant. The band are strong enough to keep up with these changes as layered harmonies and melodies jump, swing and fit into the overall sound without ever feeling out of place. The record ends with the impressive ADHD, calling back to their early work on their debut, but updating it with appealing, plinking piano, an almost hip hop beat and pop-laden vocals.

Walking Like We Do is a testament to a band that is willing, and brave enough, to try something new so early on in their career. They could have just played it safe and continued on the fine work of Love in the 4th Dimension, but they should be commended for creating something deeper, more structurally sound and a pleasure to listen to. The vocals are the strongest we’ve heard from Juliette thus far, and arguably, the lyrics, whilst being more subtle, say much more in fewer words – the sign of a great writer. It can be endearing one minute and thoughtful the next, with everything wrapped in an undercurrent of confusion and paranoia about the future of our world. Walking Like We Do is a big step forward for The Big Moon and an unexpected but very welcome surprise.