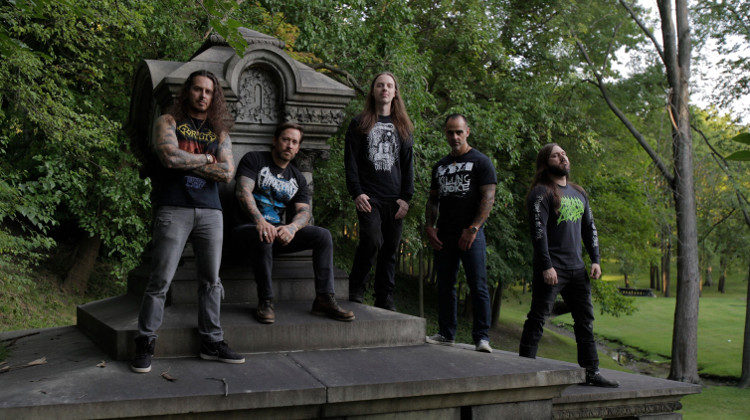 Temple of Void are back with their crushing third full-length record, The World That Was. Vinyl Chapters sat down with guitarist Alex Awn to discuss the new record and all things Temple of Void.

The World That Was really ticks all the boxes. The musicianship is top class, as are the vocals. Are you happy with how the album turned out?

It’s definitely the best sounding record of the three, and it’s the most cinematic. Overall it has a very cohesive flow and tells a dynamic story. We’re really happy with the atmosphere. The individual songs are great, but they come together in a way that really flows and connects together with the artwork. It’s total death-doom.

How would you describe Temple of Void’s music to someone who has yet to hear it?

First and foremost we’re a death-doom band. So we take what we want from the death metal and doom metal genres and put our own spin on it with our unique set of influences and perspectives. To quantify that, you could think of taking elements from bands like Morbid Angel, Bolt Thrower, Asphyx, Autopsy, and Cannibal Corpse, and blend them with elements from Katatonia, Paradise Lost, Alice in Chains, and My Dying Bride. That might get people in the right ballpark. We write death metal riffs that you can headbang to and will get stuck in your head. And we complement that with atmosphere, melody and a sense of foreboding. Anyone can write a good riff, but atmosphere and song-writing is a different ball of wax, and that’s where we set ourselves apart.

Back to the new record, how long did it take you to record The World That Was? Tell us a little bit about the recording process.

We took a year off from live shows to make it happen. 2019 was spent writing and recording. We tried being an active band but it was too hard for us to focus on writing so we abandoned playing live for a year and just put our heads down to write and record. We recorded it at Mt. Doom Studio, where we’ve been since the demo days. We’re pretty efficient at tracking, doing everything within a week or so. Then the process gets a bit protracted as we work with friends on sound design and synths. And then go back and forth with mixing. But the initial tracking is all done pretty fast. It’s not perfect. We’re humans. There are no click tracks. It’s an honest record. It’s not perfect.

What is your favourite track on the new record, and why?

My favourite track is the closer, The World That Was. It was the first song we wrote for the album and it just kept sprawling and growing in interesting ways. It took us a long time to rein it in and finalize it. But the 10-minute closer has been described as, “an album within an album.” I think that’s a cool way of looking at it. It’s a genuinely epic journey across what you could consider three movements. But it all flows seamlessly. So it was a lot of work, but I think it’s a triumphant resolution to the record. I really enjoy playing it. The beginning is very sombre and emotive, there’s a stomping death metal part, and then it closes with this shoegaze-y kind of part. It’s very cathartic.

This record is filled with massive riffs. Who brings most of the initial riffs to the table when you guys are writing new music?

The riffs are brought to the table by Don and I. We work really well together and can make each others’ riffs better by closely collaborating. But the whole band has a very strong hand in writing the songs by the way of arranging the riffs and suggesting musical themes and ideas. The riffs are just ingredients.

Do the members of Temple of Void listen to and collect vinyl?

Mike and Brent have the biggest vinyl collections by far. I collect but I don’t collect new metal. I buy all my metal on CD. I tend to collect more soundtracks than anything else.

From the metal side, definitely stuff like Sinister, Deicide, Cannibal Corpse, Immolation, Gorguts, Asphyx, Bolt Thrower, Death, Autopsy, Paradise Lost, Neurosis, Godflesh, Katatonia, Tiamat, Burzum, and the first Machine Head record. And from the non-metal side, I personally draw influence from Failure, Ride, AiC, Pearl Jam, Agitation Free, and Ash Ra Tempel, among others. I listen to a lot of krautrock, grunge, and shoegaze. And all that makes its way into what I write, but not overtly. Your average listener will still think we sound like a mix of Bolt Thrower and Paradise Lost. But the influences are a lot more nuanced and complex than that. And I’m only speaking from my own perspective. The rest of the guys have their own varied backgrounds.

How much do you enjoy playing live shows?

We love playing live. With the right vibe playing a show can be a truly transcendent experience. We’re always chasing that high (which is a lot safer than the alternatives).

Is there a favourite song you love to play live, and why?

I know Brent and I love playing A Watery Internment live. It’s got the bulldozer mid-tempo riffs upfront, a hypnotic part in the middle, and then these huge chords at the end that makes you feel like you’re summoning some sort of leviathan on stage. I love playing it. Jason’s drums rule on this one in particular.

What plans do you have up your sleeves for touring for the new record?

Nothing set in stone. We’re working on it.

Going forward, what can we expect from Temple of Void?

2020 is a good year for us considering we have the Decibel Flexi track out, the three songs on the 4 Doors to Death CD, and then the full-length. So we’re putting out a lot of music this calendar year. I hope we can deliver a fourth record in a shorter time-frame than it took to do album three. We’ll try and get some more shows further afield. Hopefully, make it over to Europe. We shall see what the old gods have in store for us…

You can check out our review of Temple of Void’s ‘The World That Was’ here.