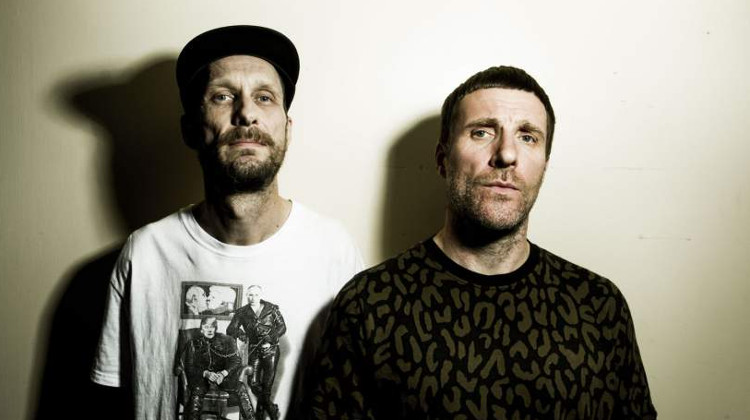 Sleaford Mods’ new album is a collection of songs which provides an overview of their success in the last seven years. This album features B- sides and unheard tracks, making it a must for diehard fans of their uncompromising, in your face style. All That Glue is released by the iconic label Rough Trade who championed the likes of The Smiths, The Libertines and The Strokes to name a few.

Vocally the record has a very natural style which I would liken to a cross between Billy Bragg for direct political confrontation and The Happy Mondays for Northern no-nonsense expression. It feels like this album is driven by a wave of almost unrelenting anger and Sleaford Mods describe themselves as being the voice of the working class. I understand the realistic approach they are going for and the fact that this album is holding up a mirror to society. It’s reflecting back how people really are in the world out there… in some quarters of society, at least.

So, I understand what Sleaford Mods are doing but there are tinges of nihilism and hopelessness in tracks such as Jobseeker that I can’t latch onto. There is a lot of anger out there, particularly at the moment, but I found myself reeling back from some of these tracks and the anger in them. I like the street poetry style of this duo and the honesty that they display throughout. Being natural and being real definitely has a lot of advantages as an antidote to some of the postering pretentious music going on out there. There is also an interesting take on masculinity weaved into the record and after a while, I started to wonder if Sleaford Mods are actually being ironic, sending up what they see as toxic masculinity. Because their style is so raw it’s hard to figure out whether they are being ironic or not.

The band consists of Jason Williamson, a straight man married with two kids and Andrew Fearn who is gay which leads to two different outlooks on life that benefit the music in different ways. Fizzy is all about a previous manager Williamson worked for and makes the interesting juxtaposition of artists who care versus crooked managers who just want to exploit artists to make money, a familiar complaint in the business world albeit an expletive riddled one: “Blanked out on the bed of thick monotony”.

When You Come Up to Me goes against the grain slightly with strangely haunting and beautiful lyrics that are at odds with the whole presentation and general style of this band: “The sun is nailed hard to the weather, it rips up the cars and the homes and the roads.” Tweet Tweet Tweet is about twitter and the way that people bottle their anger from day to day and then let it out in an anonymous torrent of rage on social media. This a particularly relevant song at the moment and it is well expressed.

All That Glue is a confrontational album with deeper meaning at its core than would first seem. A nod to punk with working-class sensibilities.