The latest release from American rock band Skillet should keep their fan base satisfied.

Victorious is the tenth studio album from the American rockers, Skillet. It is the follow up to the popular 2016 record, Unleashed, which was certified Gold in the United States. The lead single from Unleashed, Feel Invincible, had more than 150 million audio streams and made it to #1 on Rock Radio: “Unleashed recharged us, and we returned to what we love about writing,” states Skillet co-founder John Cooper. “It was tight and electronic hard rock. We wanted to keep the sound modern and pull in influences from hip-hop drums and keyboards while staying ‘riffy’. Victorious started there. Our confidence was sparked by the last record and all of the other projects. We were feeling prolific.”

The record kicks off with the lead single, Legendary. This one has a signature Skillet sound, and their loyal fan base will likely connect to it. For that simple reason alone, it is a fitting opener for the album. Lyrically, Cooper was quoted as saying that the song is meant to be “a call to make your life matter.” The sound of the track simply follows the same formula that has made the band successful. 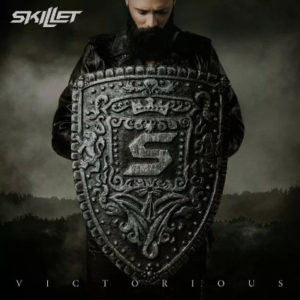 The record continues on with the tracks You Ain’t Ready, title track Victorious, This is the Kingdom, and Save Me. The title track was written after reading about depression and is an open letter of sorts to anyone struggling with their personal demons. John Cooper cited the death of Linkin Park frontman Chester Bennington as the inspiration for the song. Musically you hear much of the same throughout the first half of the record, with choruses seemingly designed for crowd participation and riffs begging to become heard between plays at major sporting events.

The record pushes on with seven more tracks, all sticking to their tried and true formula. Most of the production on this record was done by the band themselves, and not many risks were taken. At times, it was overproduced, and the similarities between songs made me forget where I was at on the record. Skillet has had tremendous success over the course of their career, and clearly they have a loyal fan base that will support whatever they release. This record should be no exception and will allow them to carry on with the momentum that they have built with their fans. Overall, the record is what it is…it will more than likely be a commercially successful record with songs predestined to be heard on advertising campaigns for major corporations. Concert goers that enjoy sing-songy choruses and yelling “Hey” back to the band a lot will dig this. Victorious is a solid if not spectacular effort that likely won’t perk the interest of many new listeners, but will keep the Skillet faithful singing along in agreement…or whatever.