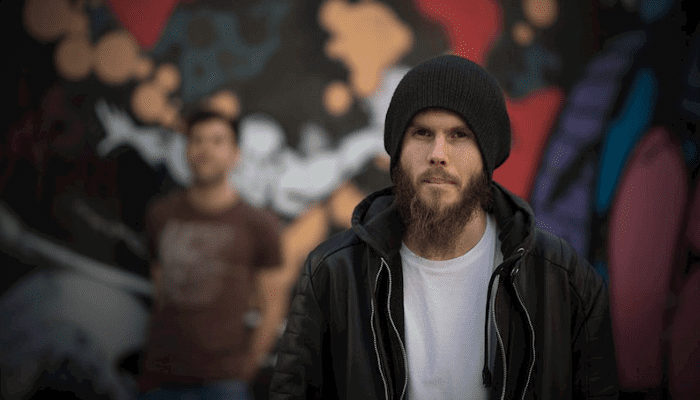 The world is currently more visual and media-based than ever before in its history. Some people would argue that any artwork accompanying music is now more important than ever to get a message across, and much of the time you’ll have less space to do so; the artwork might be displayed on a small phone screen, for example. New single Get Out To New York by Astral Cloud Ashes makes use of media and music admirably to fully realise the piece working with Alexey Chistikov and Antony Walker to create a post-modern urban parody of Grant Wood’s iconic “American Gothic” painting to accompany the song. This has been mutated with New York themed backgrounds and an atomic explosion, perfectly fitting in with the tracks core material based around the intrepid city, and mixed with views displayed by Author Ayn Rand in her 1938 futuristic novel, Anthem. It’s all very clever and an unusual set of material for musician Anthony Walker to base a track around. 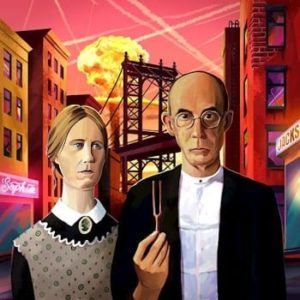 The track starts with gentle guitar strokes and drums that lead into a sudden awakening as the track speeds up into romping rock featuring turns at every intersection. The upbeat tempo and hungry rhythm is a surprising feature against the daring source material with drums performing admirably throughout, keeping pace with the melodies that follow. If you’re looking for comparisons, think early 2000s new rock revolution artists like Bloc Party with its fast pace, detailed strumming and underlying heavy atmosphere.

Walker’s vocals fit in with the new-punk material well as he mixes lyrics of typical New York scenes, Benihana restaurants and books and culture with dystopian views credited to Ayn Rand.

There’s a lot going on with this song which can, in areas, make it feel a bit convoluted. The listener may struggle to know whether to keep pace with the amount of musical changes, or try to catch pieces of the lyrics flying around. But what the track does do well is the potent production wand the artist being unafraid to make his poignant views apparent. It’s a personal story that the artist hasn’t changed to suit the listener in any way, and this is commendable.

Get Out To New York is a whirlwind of a track that tries that features sporadic breaks to catch a breath and make sense of the track. Walker uses this pace to get across as many ideas as possible, spilling his heart and philosophies along the way. With fine production and an ear for perfect chord progression, Astral Cloud Ashes will be one to watch out for.