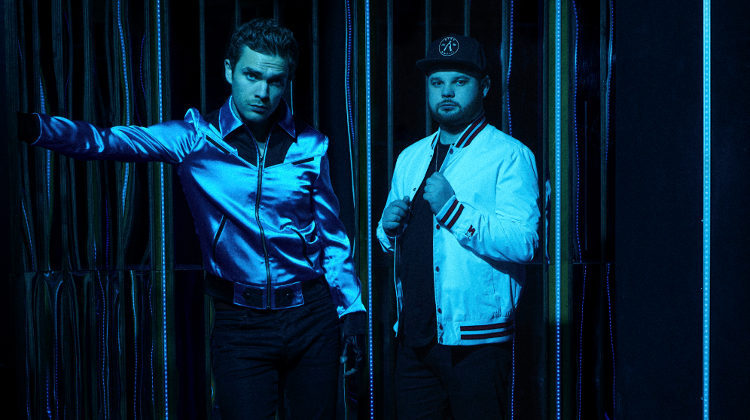 Royal Blood are a band that know how to rock. From as early as their self-titled debut album, singer/guitarist Mike Kerr and drummer Ben Thatcher have shown anyone willing to listen that if you’ve got the mentality and ability, two members in a rock band are more than enough to create pulsating, creative tracks that hit hard and don’t let go. With the band’s previous two records creating waves worldwide and accumulating 2 million global sales, new album Typhoons looks to replicate the success by keeping that enigmatic riff-heavy sound but also able to play with a more nuanced atmosphere.

Stating with first single Trouble’s Coming gives you a taste of the anthemic rock energy and, playful riffs littered throughout the record. The tailored, fuzzy guitar has almost become a signature sound for the band now, instantly recognisable as Royal Blood and still impressive that it’s coming from a bass guitar. The catchy as hell chorus shows the duo still know how to grab a listener’s attention and the lyrics are more in-depth and cleverly played with, Mike Kerr here assessing his fragile state of mind: “In my reflection, I see signs of psychosis I try to pay them no attention cant keep them under the surface”.

Oblivion follows with a distorted and ruthless guitar sound that builds once again on a thumping drum track before pulling it all back in a Muse-inspired breakdown section. It then hits hard again with a riff Daft Punk would be proud of. Album-titled track Typhoons then shows off the band’s immense swagger and guile, Kerr really enjoying himself in glitzy, playful build-ups before a powerful and immense chorus joyfully brings it all together.

If you know anything about Royal Blood, you know they make the most of big riffs and beat-driven drums throughout their music, and they rely on the safety of this sound for the first half of the record. The second half, however, opens up a little more; the style is still there but they feel more willing to try other things. Limbo is a good example of this, starting with a synthy, disco intro before falling into perhaps the heaviest atmosphere on the record. Add in silky smooth vocals dripping in suave sex appeal and a sultry, upbeat chorus and you’re on to a winner.

Boilermaker has power and presence in spades but cleverly holds back when needed to allow the more subtle sections to shine. Mad Visions then builds on dirty, spacious rhythms and riffs against a piano-psyche section that leads into a fierce and frenzied chorus. You can really feel the influence of Josh Homme here (who actually produced Boilermaker) and it fits like a glove.

For all the hectic, powerful rock ‘n’ roll swagger, the record ends on a slow and sultry piano-based ballad in All We Have Is Now. It’s a calming and beautifully recorded track to finish on, Kerr’s vocals really showing off their wonderful tones and a simple yet completely addictive song structure that will stay in your head for days. The sign of a great songwriter.

Typhoons is Royal Blood doing what they do best, but with a little added flavour here and there. The big rock sound and electrifying riffs remain as Thatcher holds the beats steady allowing Kerr to bring the showmanship. The production really highlights the growth in the band’s sound and stature, building mercilessly throughout the record and easily holding your attention to the very end. Royal Blood are sounding as good as they’ve ever been.