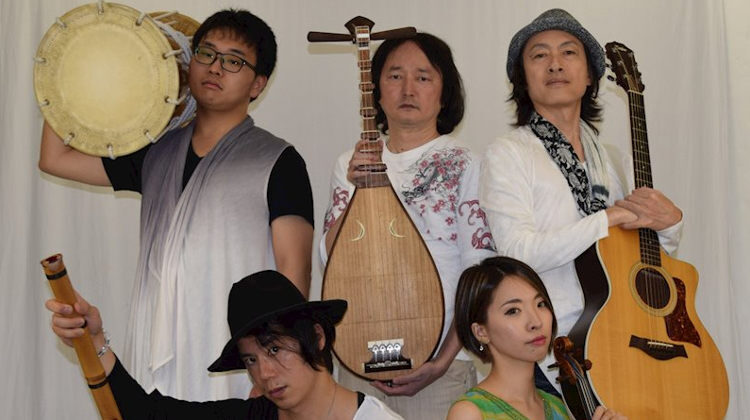 Rock of Asia bring an eclectic mix of sounds together on the appealing and endlessly inventive, Asian Anthology.

Folk/rock/fusion project Rock of Asia really know how to combine eccentric ideas in vivid and interesting ways. Spearheaded by Japanese musician Nikki Matsumoto, he takes the bravado of rock, the settled soundscapes of folk and adds in a dash of everything else to make the 10th anniversary and re-release of Asian Anthology a special one.

Starting off the record with Lal Dhaga, Matsumoto et al take us into a world of hypnotic drums, enticing folk flows and a hint of world music fusion that dances to a seductive and fulfilling melody. It’s happy music with a little classical rhythm thrown in for good measure. This then suddenly cuts out to a more middle-eastern atmosphere as vocals enter the fray to add something a little different. It’s a mesmerising opener that flits from idea to idea without a care in the world.

Solitary Friend follows with strings providing the overwhelming power of the track this time against a more pop-rock drum beat. Matsumoto is having fun here stretching his vocals around the wandering rhythms and atmospheric instrumentation.

From the opening couple of tracks, you realise what skilled musicians are part of this project, and it takes an impressive sound to show off all the dexterity they have to offer. MIKOTO is an emotional journey led onwards by sorrowful strings and panpipes with an extended intro providing a powerful entry. The song uses all of its 5 minutes runtime well, building itself into a Spanish guitar-fueled frenzy by the middle before ebbing and flowing nearer the end to great effect. You don’t need to understand the Japanese language to feel all the emotion that has gone into this track. Vision Led On is an interesting piece, calling on a mix of psych-rock and folk-laden sounds to drift the track forwards in a haunting manner before bursting into an energetic classic rock sound. The Parallel carries on that classic rock sound with something that wouldn’t feel out of place as one of the more eclectic The Who tracks.

The energy and improvisation don’t let up as the album continues right into its deeper cuts. The Unsaid gives off more world music vibes, taking the form of a sitar stylised intro before settling on a more pop-rock melody that combines well. FUNATO uses the trick of a slow build-up once again to release mystical energy and hypnotic power that builds and pulls back in a tantalising way, almost feeling like a fantasy film score. The record ends on the soft yet enigmatic The Daughter, an acoustic track mostly composed of vocals and guitar before harmonising filters through later on to great effect.

Asian Anthology by Rock of Asia is a delightfully eclectic mix of folk, world music and rock that comes together in interesting ways. Never an album to be boring, it twists and turns through different ideas and genres with the band members able to keep up and have fun at the same time. Nikki Matsumoto has created a delightful sound to enjoy and come back to when you’re looking for something that little bit different.