Home » articles » Rick Simpson: Everything All Of The Time: Kid A Revisited – Review 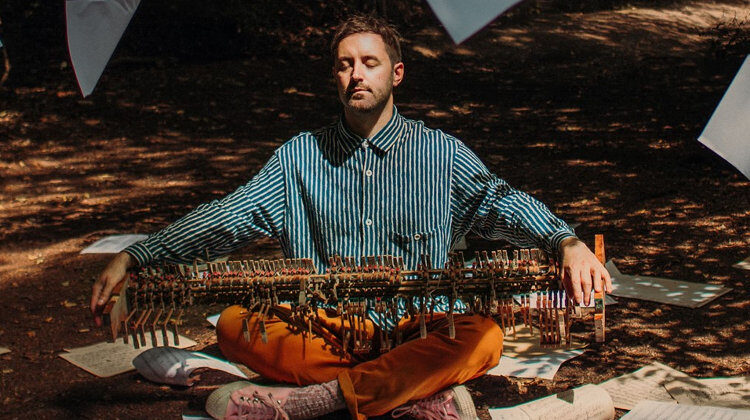 London-based pianist Rick Simpson honours the twentieth anniversary of Radiohead’s landmark album, Kid A, with his own interpretation of the entire disc, reimagining their acclaimed opus through a modernist jazz lens.

The award-winning pianist and composer Rick Simpson is a graduate from the Guildhall School of Music and Drama and a gilded exponent of contemporary jazz who has carved out a respectable niche as a master instrumentalist for hire and a roving member of ensembles across the capital, performing at venues such as Ronnie Scott’s, The Vortex and The Bull’s Head with the likes of Christian Scott, Eric Harland and Leo Richardson. For his latest offering, he has turned to a landmark album by one of his chief inspirations, Radiohead’s 2000 release, Kid A, and remoulded its pensive alienation and dense textures into idiosyncratic and sonorous new shapes.

The English quintet are well known for their love of jazz, particularly the heady sprawl and meditative flow of Coltrane’s John and Alice, Miles Davis and Charles Mingus. The National Anthem featured an eight-man brass section letting rip on an expansive arrangement by lead guitarist, arranger and composer Jonny Greenwood, Pyramid Song swayed on a punch-drunk, modal pulse and the spectre of Davis’s epochal and impressionistic Bitches Brew loomed over the recording sessions for both Kid A and its sister album, Amnesiac.

Since their inception, there has been a steady flow of traffic between Oxford’s masters of unease and disquiet and numerous modern jazz practitioners, from Brad Mehldau’s piano trio covers to Robert Glasper’s inspired reworkings and the Noordpool Orchestra’s big-band attack. Radiohead have assumed the mantle of ‘rock’ band that jazzers love to reference and pilfer.

Four years on from his 2016 outing, Klammer, the British jazz pianist Rick Simpson has regrouped with a new line-up of kindred spirits including James Allsopp on baritone sax, double bassist Dave Whitford, drummer Will Glaser and tenor saxophonist Tori Freestone to conjure a spirited and luminous take on the record’s modernist, experimental and electronically treated soundscape.

Simpson plumps for imaginative arrangements throughout, facilitating thrilling, creative improvisation and a plethora of opportunities for his gifted soloists to unleash their own individual voices on a project which could so easily have descended into stilted reverence or cosy, dinner-jazz politeness. On some pieces, he will both honour tradition and the source material, whilst on other occasions, he grabs the song’s kernel and takes the listener like a child released from confinement, with each musician unfurling into their own character within the song.

On Everything In Its Right Place, the leader lays down probing ripples on feathery piano over a silky, floating groove, whilst the horns smoulder with a sense of plangent harmony and lyricism. The album’s title track goes further, powered by Pharoah Sanders-like squawks and squalls, scampering piano and a restless barrage of drumming. The National Anthem tumbles into a free-jazz rave-up, with Herbie Hancock-like keyboard trills escalating towards a destabilising pitch of intensity against the bursts of cacophonic brass.

On How to Disappear Completely, the band keeps the mournful melody, with a flame-throwing saxophone wrapped around ruminative piano chords which build to an irrepressible denouement. The electronic jitters of Idioteque are re-assembled into a quicksilver bop work-out, whilst Motion Picture Soundtrack glides, rises and falls like the closing of a film; wistful sax wafts like a scent whilst Simpson plays it light and melodic, like Bill Evans spinning ear candy.