Sam Fishman has always had a penchant for not going by the book, and his new record End Of Time is testament to this. The usual album-format is thrown away with here, in a way that psychedelic rockers Pink Floyd did back in the day. They created music that was blended by their own rules instead of a set format of music tracks, and Fishman has done the same. With short commentary pieces that separate the music and push and underlying story, it’s an inventive record full of clever ideas and addictive melodies.

The record starts off with one of these short narratives, read by Debbie Gratton. Her commanding vocal tones have similarities to Hollywood actress Tilda Swinton, which are perfect for the album’s mystical commentary that could have been lifted straight out of a Tolkien novel. It’s all very strange at the beginning as you follow this mind-bending narrative, but you get used to these pieces that are littered throughout, and actually begin to look forward to them as the story unfolds. 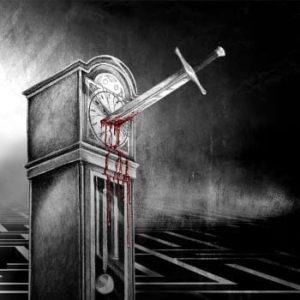 The first full-length track on the album is Omens. This sees Samantha Cram taking lead vocals in a dark and mesmerizing rock track baring fleeting resemblances to early days Black Sabbath mixed with Evanescence. It sets the pace nicely as it slowly builds up to a raucous and adrenaline-fuelled section that hits you like a tonne of bricks, before metal riffs and Fishman’s beefy drums kick in and change the track completely. The different styles somehow fit seamlessly together against some sterling vocal work from Cram.

Voices Emerge starts with eerie guitar sounds in a well-crafted track performed by Ryan Acquacotta. We’re treated to a more tailored sound here, akin to rockers such as Alice In Chains or Silverchair. Acquacotta is in his element as he sings “I need some guidance” amongst rattling, over the top guitar solos and emphatic drums, beating you into submission and leaving you hanging on every note. Quiet sections help stitch everything back together before you’re once again thrown forward ferociously, and before you know it, Gratton’s lucid tones are back and feeding you with the next part of the epic journey.

Stolen Lives low-fi opening makes way for heavy rock once again, as you get barraged by a wall of sound that ebbs and flows over simple ideas that fit perfectly around menacing vocals, delighting in  the off-beat. Mantra is the perfect companion piece to this, separated by more commentary that helps make sense of the upbeat and faster pace of the track, and mixing in influences from Nine Inch Nails and Iggy Pop, and even a little Pantera.

For all the heavy vibes and dark connotations, the record ends on a light note which the vocal commentary sees right through to the end. Airy piano and floaty synths are apparent from the start on A Short Dream Revisited that are allowed to flow over the listeners conscience, creating a beautifully cleansing contrast against the rest of the record. This effect lulls you into a sense of security and leaves you with a smile on your face after a journey that has twisted and turned throughout.

End Of Time is a mesmerizing record that shy’s away from the usual album format to take you on a charming adventure. The storytelling pieces are both unobtrusive, but necessary to push forward the narrative, and allows the listener to be prepared for the following track’s ideas and atmosphere. End Of Time is an extremely clever an intuitive record that feeds on emotion and benefits from a list of extremely talented musicians to get its messages across. This album is a journey that everyone should take and revel in doing so.