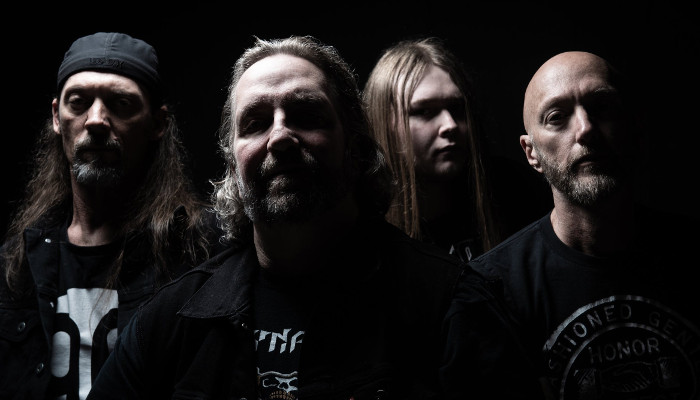 Sacred Reich was formed way back in 1985 in Phoenix, Arizona. They quickly rose to prominence as one of the leaders of the second wave of thrash metal, releasing musically and lyrically powerful records. Singer/Bassist Phil Rind brought socially and politically conscious lyrics to the table, and the music was among the best of the genre. Full-length records such as Ignorance, The American Way, Independent, along with the crushing EP Surf Nicaragua, made them stalwarts of the thrash metal scene. Their brand of thrash metal rivalled the more successful bands of the era, and those records hold up to this day. A few breaks in the action and a few lineup changes later, Sacred Reich has returned to deliver new music to the world. Phil Rind and Wiley Arnett have added new rhythm guitarist Joey Radziwill to the fold, as well as bringing back former Sacred Reich and ex-Machine Head drummer Dave McClain. The band has already been touring hard this year, and with the release of the new record, they look to keep the momentum going. 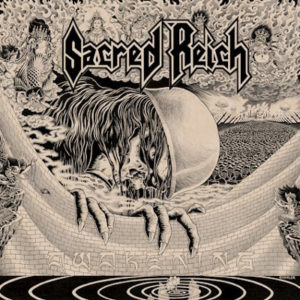 Awakening starts off with the title track, which features great vintage thrash riffing and precision soloing from guitarist Wiley Arnett. The drum sound is huge and fitS the track perfectly, with it being clear that the return of McClain into the fold has rejuvenated the band. This is a great opening track, and the tempo changes are done masterfully. Vocalist Phil Rind still has a very strong voice, and the last minute of the song is particularly crushing.

The first half of the record rages on with Divide and Conquer, Salvation, and Manifest Reality. Heavy and relevant lyrical content persists, and Rind sounds as good as, or better than he did 30 years ago. The tracks twist and turn in superb fashion, and the band is firing on all cylinders. With powerful grooves, masterful thrash guitar work, and a rock-solid rhythm section, these are simply solid metal songs and get the job done.

The next half of the record opens up with the track Killing Machine, which keeps the momentum going. Emotional lyrics speaking about the death toll from war, and continued strong musicianship make it a highlight of the record. Death Valley, Revelation, and Something to Believe close out the album. Revelation speeds along in classic form and Something to Believe closes out with a dynamic and melodic sound. Sacred Reich didn’t try to reinvent their sound with this album, and it sticks to the formula. However, it is relevant and sounds fresh, and is a welcome offering into today’s musical landscape.

This is an incredibly listenable record, and it made 46-year-old me feel like a 16-year-old me at times while listening. This is Sacred Reich. It’s what the fans expected and it’s what the fans received. There are no frills, no punches pulled, and no gimmicks. Old school thrash fans should rejoice, and new fans should hop on board. This is a very strong record, and every indication shows it will only get better from here.