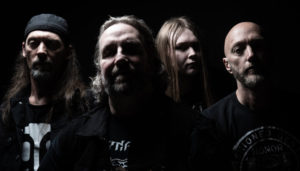 Sacred Reich returns in full force with their appropriately titled new release, Awakening. Sacred Reich was formed way back in 1985 in Phoenix, Arizona. They quickly rose to prominence as one of the leaders of the second wave of thrash metal, releasing musically and lyrically powerful records. Singer/Bassist Phil Rind brought socially and politically conscious lyrics to the … END_OF_DOCUMENT_TOKEN_TO_BE_REPLACED