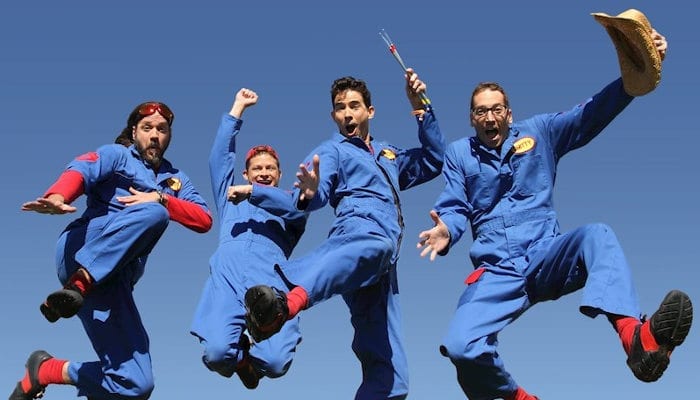 Emmy Award winning band Imagination Movers might be a group that people without kids haven’t heard of, but that doesn’t take away from the fact that this collective are seriously good musicians. Their music is seen as a way for adults to enjoy something with their kids, and also a stepping stone for children to transition into other music as they grow. The band use their songs to have fun, help kids with emotions they may be developing, and just bring the family together through the power of music. New record 10-4 uses all these traits to create a series of non-condescending tracks that the whole family can enjoy, with strong ideas and different musical genres used to keep things interesting.

Socks starts off the record using Country stylings against a message based around being what you want to be, and not conforming to stereotypes. This is portrayed through lyrics such as “why does every girl in the world have to be a princess?” as well as more zany ideas such as collecting socks instead of watching superhero movies. The music isn’t bogged down too much by the messages, as it switches to a half-time rhythm with funk connotations (think Red Hot Chilli Peppers for kids), before going back to its fast country rhythm and discussing different types of socks. Sounds strange? It is, but kids will love it (and secretly adults will to). 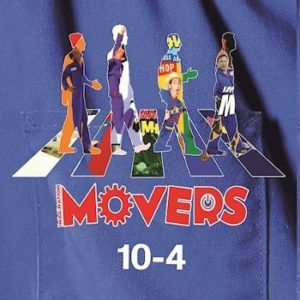 So Glad You’re Here is a shout out to all those kids that feel lonely, down, and not happy with who they are. The band want them to feel wanted, and do this through a reggae rhythm with an uplifting message of you are who you are, you’re good at something, and you’re loved. It’s gentle, feel good atmosphere may come off a bit cheesy and could be lost of the very young, but for someone out there, it could just be the words of encouragement they need to bring them out of their shell.

Mad Hatter’s Tea Party takes on the blues, but unfortuantly isn’t as catchy as other tracks. A strange multi-pitch rap section seems a little odd, and tt doesn’t capture the imagination quite as well as other tracks. Its saving grace is a short running time, being more of a filler than a full song. The multi-talented Lisa Loeb guests on vocals for Butterfly Wings which is a sweet acoustic folk track full of good connotations and strong, layered vocals, whereas Sunday Morning Song manages to take on indie-folk in a track that’s one of the most grown up on the record. This is the perfect way for kids to transition into traditional music later on in life, and opens their eyes to different genres. The melodies are some of the strongest on the record as the track grows into its own skin and improves with some Coldplay style rises and tight production.

Game On starts off with ‘ping pong’ sounds before vocals play on this by alternating between singing “red paddle, green paddle”. It then moves onto other table games such as fussball and air hockey. It sounds weird, but its all things that kids love playing, and is a homage to these games that they can relate to. It’s all very clever, and with ideas close to what the band Weezer love doing with vocals – layering over each other and creating new melodies – it builds into a highly addictive sound.

The Hiking Song uses hiphop beats and a rap to discuss the joys of hiking, presumably to get kids outside and amongst nature. Parents can use this song as an excuse to entice their kids outside… and hell, it even makes me want to go on a hike. The record ends with a youth appealing hashtagged track called #fuzzylittlecat. It’s a cute end to the album that younger kids will appreciate more than their grown up counterparts, and once again, its short running time makes it feel like an interlude, rather than a full song.

10-4 is an album that works on many levels, but loses itself in small pockets of experimentation. When it hits the nail on the head, it does so with aplomb, with many tracks appealing to adults and kids alike. It has well-crafted and informative pieces that will really make kids think for themselves and all done with ‘real’ music. It’s hard to think what the right age kids should be to enjoy this record, or if, in fact, there is a right age, but the messages hidden within will help kids develop into well-rounded individuals. 10-4 has a few rough edges, but the good intentions of the band, tight musicianship and well-crafted tracks will bring families together in beautiful way.