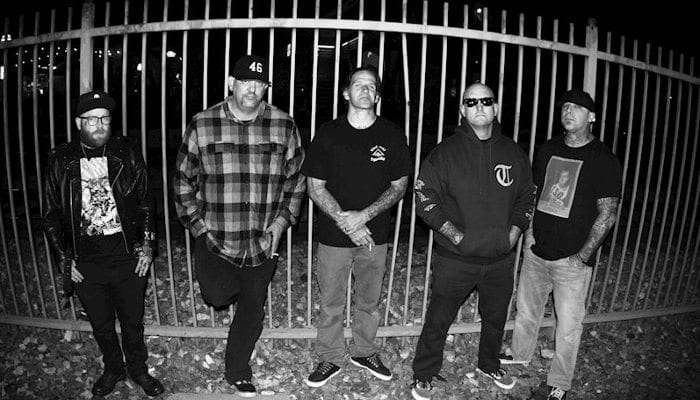 Dead Friends 46 release new record Hardcore, and with it create an energetic punk album backed by an underlying message of angst against heart.

Southern Californian Hardcore outfit Dead Friends 46 were only formed in 2015, but they’ve quickly become established into the Orange County punk scene. Relying heavily on an old-skool 80s hardcore punk sound, they let the music do the talking, but not afraid to confront hard-hitting that have affected their lives through the lyrics. This honesty and energy is brought through the tracks on new record Hardcore, allowing the band to air their dirty laundry to anyone willing to listen.

The Firm opens with a scream form vocalist Don Mazza of “Athletes to the Front!” before the record kicks in with all the punk angst, speed, and chaos you’re going to be assaulted with throughout the album. The oldskool sound is instantly apparent, and leaves you envisaging early 80s mosh pits and sweaty little pubs with buckets of atmosphere. The playing is tight for all the speed, and vocals rebellious as a bass solo is followed by a scream of “move mother-fuckers!” before everything kicks back in. 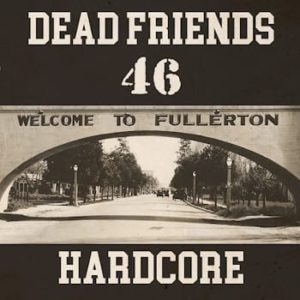 Rise Up keeps up the rollicking energy but adds in more melodic sections and camaraderie between instruments, backing vocals and band members. It feels like a fight in an irish pub between friends, with nods towards British era post-punk and early Clash. Band From The Pubs adds in more ska elements and focuses on true life experiences of band members, using the well-oiled machine of singing about something everyday that people could relate to; in this case a heavy night on the town gone wrong. The lyrics might not have all the nuance and dexterity about everyday nightlife as, from say, The Arctic Monkeys, but this is made up for with the sheer energetic pace and power of the piece.

Mass Hysteria is the band’s take on Social D’s 1982 classic featuring tight production that fills your mind with intensity and a reminder of how clever lyrics and punk have formed great partnerships in the past: “An emotional outbreak, stepped on by people’s feet, controlling panic, who’ll be the next one in line?”. Lady Doom rattles like a punk-drunken sea shanty with a real Irish/British, oi/punk vibe, whereas Devil and Don tries for the same trick, but unfortunately doesn’t have the same effect. It goes for more of an angle to a story, but by this time in the record it feels a bit disjointed.

The record, however, ends in a good way with exactly what was needed in Dead Friends. An ode to companions past, the track is impressive in the way it can portray such heart and sympathy with such energy and anger. These contrasts add another layer to the track, and coupled with the switch down half-way through reminding of early Sonic Youth, this works really well.

Hardcore is an album of energy, anger and hard-hitting lyrical material against early punk roots. Many songs focus on alcoholism, drug abuse, and family feuds, but it’s all said with no malice or judgement, making a change from other more sour turns for the genre. The band performs admirably in their roles and instrumentation is tight with production capably releasing vital turns when necessary. The record could have done with a little more variety, however. Just listen to the fantastic closer Dead Friends, and you can see how much a decent change in pace and source material made all the difference. Even with this missing, Dead Friends 46 have created a decent record here that airs frustrations and odes their friends in a warm but energetic way.