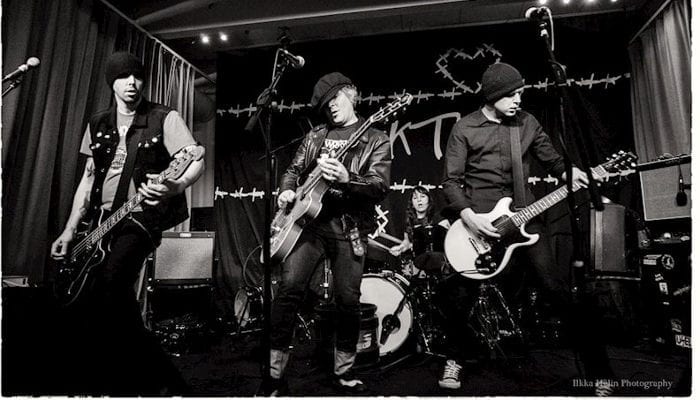 Daggerplay return with new record Subterranean Reality, injecting some well needed fun back into the punk sound in an upbeat and guitar driven record.

The 90s were renowned for that American punk sound, but it seems to have slowly ebbed away from the mainstream over the last decade or so. Finnish rockers Daggerplay are here to remedy this. With their fast-paced and infectious punk sound, new album Subterranean Reality aims to bring the fun back to the genre, drawing on any influences they can fit in to create their chaotic and boisterous sound.

Straight away we’re thrown into fast paced retro rock guitars with album opener Red Sky. With a kind of cowboy-esque riff that tantalizingly throws the track forwards, there’s no need for lyrics as the song creates its own story. I kind of get vibes of the cantina music from star wars if it were played on guitar, mixed with the Pogues. Anyone else? Anyway, it’s fast, it’s fun, and the ever changing rhythms keep you occupied enough to never get bored. 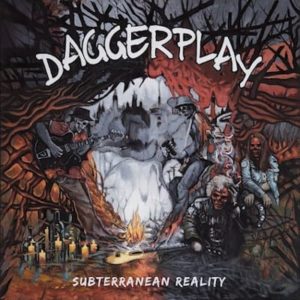 Cruel Wind Blowing puts on it’s Rancid hat as it sways between the fast and the contemplative. Once it slows down and vocals kick in, we’re treated to a fine melody that’s beautifully traversed by Pekko Mantzin’s vocals as it once again speeds up and throttles your brain in its stomping chorus.

Black River ups the ante by starting off with a ska beat before transforming into a track that Alice Cooper would be proud of. It twists and turns, and the intermittent ska beats really gives it something different. Add to the fact that it has one of the catchiest choruses on the record and you know they’re on to something.

Days Like These focuses more on the 90s Punk sound from the likes of Green Day and Blink 182 as it struts its way through power chords and tight solos, whereas Killburn Highroad switches up things once again by focusing on Irish punk. This is performed with perfect precision, also being very well produced so this high energy burner can really hold its head high.

Afterlife manages to strut with the confidence of a band having lots of fun as Mantzin belts out “Let’s drink to the Afterlife!”. The lyrics are dry and perilous, matched by the tenacity and power of the music that the words are wrapped around. The melodies allow the track to go off on subtle tangents and, once again, the sound reminds you of the 90s punk stalwarts that tailored a genre of their own.

The record ends with Sinister Blues, and that is exactly the words to describe this track. Starting slow and sultry,think of Tom Waits’ Rain Dogs mixed with Minnie The Moocher. This is then perilously thrown out the window in favour of, once again, fast-paced, reckless rhythms with no remorse. This then settles back down into form, with the track continuously switching throughout, making for great fun and perfectly summing up the frivolous and frantic atmosphere of the record.

Daggerplay have really found their feet with Subterranean Reality. The way it manages to balance the line between good old fashioned punk rock and throwing up ideas and transitions of their own is impressive. The inclusion of off-kilter Irish punk or subtle influences from other genres such as ska or be-bop is inspired, and help break up the record. It also brings that element of the jovial right to the forefront. If this album does one thing, it makes you want to go and see the band live, because if this record is anything to go by, you know you’re gonna have a rollicking good time.