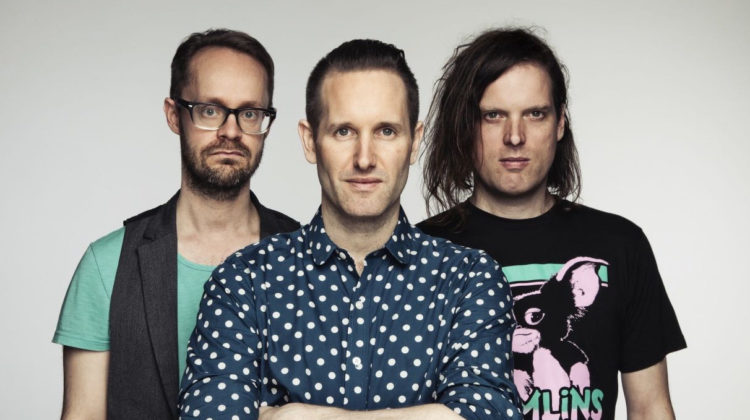 How have Ash been around for 25 years? That’s the conclusion you’re left with when you realise their new vinyl box set starts with first single release Jack Names The Planets from way back in 1994. This was back when Britpop was in full swing, bands were praised for being raucous, feuds ran riot (I’m looking at you Oasis and Blur) and music videos were grainy and camp masterpieces. This trio of youngsters (Tim Wheeler, Rick McMurray and Mark Hamilton) were the voice of youth in the 90s, where their punk rock roots fed the ears of teenagers deep in the throes of angst and their own coming-of-age stories. But the 90s are not where Ash’s story finishes and ends. The new 7” singles box set rolls right on up to 2004, showing how they adjusted their core sound over the years, but still managed to keep themselves definitively ‘Ash’.

The box set includes 20 singles spread over 10 7” discs, one track on each side. These each include dual-sided sleeves showing the original artwork; you even get the infamous ‘Cantona kick’ adorning the front of punk rock classic, Kung-fu. The set comes in a sturdy cardboard outer-casing featuring a fading green background and a retro photo of our titular indie rock heroes on the front.  It’s a real trip of nostalgia for fans of the band who will be flooded with memories from the sleeves artwork, but I’m guessing most of them would have originally owned them on CD, being the format of choice at the time. Having these on vinyl is far more appealing and, for any audiophiles out there, a real coup to experience each album’s singles as a collection on the format for the first time. 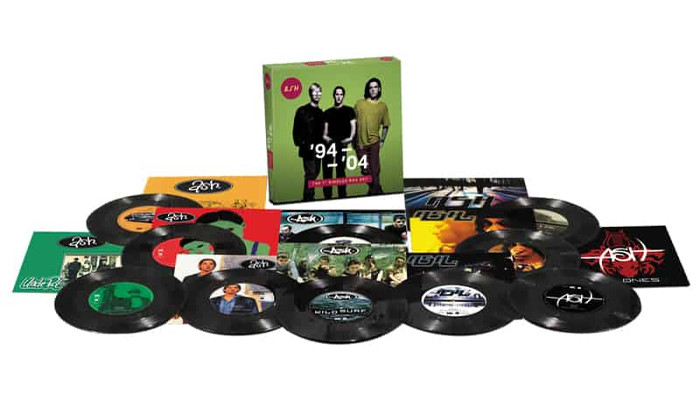 As mentioned earlier, Ash’s sound adapted and changed as the years went on; this is what all decent bands do to stay relevant and keep themselves and the fans from getting bored. They stayed with that underlying rock sound, but the early punk roots of tracks like Uncle Pat or Petrol from EP Trailer led on to more indie-laden songs such as Oh Yeah or Goldfinger from debut album, 1977. These early singles really show off the bands raw, youthful energy on vinyl, capturing that live sound that they’re renowned for. Being teenagers themselves at the time, they connected with the crowd in ways others couldn’t, and you can really hear it throughout these early singles.

This, in turn, leads onto the less commercially well-received album Nu-Clear Sounds, which still managed to produce fan favourites Wildsurf and Jesus Says, both included in the box set. This was also the period where guitarist Charlotte Hatherly was drafted in to add some depth to the music and allow Tim to solo and go off-piste to his heart’s content. Where we really hear a change in the collection is when we hit 2001 with the release of the critically acclaimed record Free All Angels. Here we arrive at a more polished Ash with crisper instrumentation and Tim’s vocals being improved from their teen-punk sound, ready to handle more grown up, ballad-style classics such as Shining Light or There’s A Star. These vinyl editions create a warmer sound that sits well with the improved production techniques and allows both the heavier tracks and ballads to come to life.

The box set then seamlessly throws us forward into 2004 with the release of the heavier and more vibrant work on Meltdown. Track Clones reminds of Ash’s foray into the darker side of rock, pulling on early influences of fellow indie-superstars Muse with a delightful hook and fuzzy guitars, with the collection finishing on Orpheus – an indie-rock stomper that doesn’t know when to quit. Once again, the heavier production focuses on those low sounds to really bring the tracks out of their shell on these later vinyl editions.

It’s easy to forget just how many great songs Ash have, and this singles box set reminds you of just what a fantastic band they are. Listening to these singles is to journey through the band’s career. The strong artwork is appealing, with the only noteworthy omission from the set being some sort of accompanying booklet with a bit of background on the band and the tracks included. Despite this, it still makes an impressive and extremely collectable package for any fans out there, and also a great way for newbies to get into a band that was one of the highlights of British music in the 90s and early 2000s.

Head over to the official Ash store if you’re interested in picking up a copy, or check out their upcoming tour dates here.