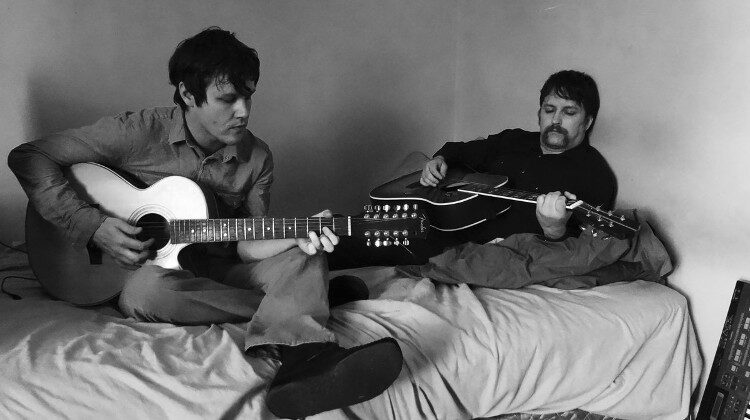 Donovan Quinn and Ben Chasny reunite for their side project of unabashed troubadour folk stylings.

Back in 2014, New Bums aka Donovan Quinn and Ben Chasny ushered a wave of critical acclaim for their gorgeous Voices In A Rented Room, a record that burrowed deep into contemplative, meandering psych-folk and exuded a scruffy, lived-in charm. A tour of the US and Europe followed, but then the duo disappeared from the game.

The pair have been mainstays in alt music circles for the past two decades, the former courtesy of lysergic folk purveyors Skygreen Leopards and the latter a seasoned psych explorer as Six Organs of Admittance. Both artists share a predilection for a certain hazy pastoral, a melodic, windswept vibe which flourishes on this beguiling side-project, now thrillingly re-launched on the back of a song, Billy God Damn, issued back in December of last year.

Last Time I Saw Grace is predominantly shaped like its predecessor, a series of pretty, incense-scented, camp-fire melodies laced with echoes of Gary Higgins (his Red Hash masterpiece in particular) and dollops of insouciant, Marc Bolan-vocals – this time with a distinct upping of production values. The record is typified by surreal wordplay, laconic humour, elegantly wasted folk balladry and a smoke-wreathed fug of daydream and lassitude.

The record commences in familiar territory with the lead single, a sloshed, cross-legged strum augmented by succulent servings of sighing slide licks; the acoustic guitars and vocals land softly and peacefully. There is more than a touch of Bob Dylan in the delightfully cryptic lyrics: “Where I lose the game of Lord of the flies/To the denim-clad creature with Spanish inquisition eyes”. The shimmering Obliteration Time is anchored by strident acoustic chords and rougher passages of busy electric. The mournful, slouching Marlene Left California is steeped in the same combination of weary regret and glazed nostalgia that Alex Chilton had down pat on Big Star’s classic Third/Sister Lovers.

Onward to Devastation is a resigned, wine-dark but ear-pleasing swoon of a melody decorated by dreamy falsetto backing vocals. Elsewhere, the hungover cover of Tommy Bolin’s Wild Dogs lands in a spooked, spectral Americana whilst the fetching Tuned to Graffiti mines the breezy yacht-pop of America for catharsis. ‘Hermitage Song’ rolls along in a serpentine, finger-picked raga glow and the instrumental closer, So Long, Kus, says goodbye with its delicate waft of mellifluous and ethereal lullaby.

For those listeners with a penchant for acid-flecked, finely crafted and ceaselessly melodic folk, Last Time I Saw Grace from New Bums will push all the right buttons; this is an alluring and graceful record whose bright harmonies, existential preoccupations and dextrous weaves of guitar are sure to engage and resonate.