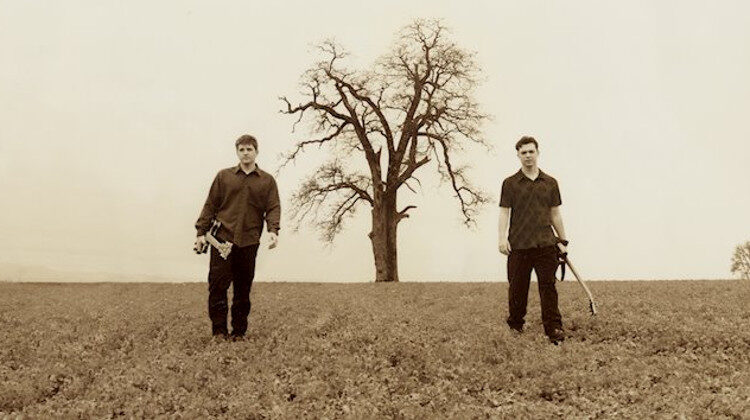 Instrumental guitar duo Moon and Bike let their instruments do the talking on new album, One.

Longtime musicians, composers, and friends, Moon and Bike take a brave step with new album, One. Featuring only acoustic and electric guitars with no vocal tracks, the album relies on the musicianship of the duo to create appealing and addictive flows that keep the listener entertained.

Starting with track River gives you a real taste for the sound of Moon and Bike as guitar tracks dance around each other in intriguing ways. The electric guitar highlights the addictive dexterity and the acoustic holds the track together with seductive rhythms and tight finger work. The atmosphere created is subtle yet poignant as the sound creates a playful story without words.

Following track Nearer Sky builds on this theme with a more anthemic, ballad-type sound that grows in stature as it progresses, this time the acoustic guitar content strumming its way through and giving the electric guitar something to play around on top of.

Keeping things fresh was always going to be a bit of a struggle with only two instruments involved, but the boys cope surprisingly well to keep things interesting. Two of Us manages to build folky rhythms against echo-laden, ebbing and flowing electric guitar which gets more intense as the track rolls forward, whereas Native takes a turn to the dark side as blues rhythms and sultry flows see it developing into a soulful sound that has a well-defined chorus. Before Dark, unfortunately, sees its sound lacking in many decent ideas that have mostly been used up on earlier tracks, with Star suffering a similar fate, but still featuring some pronounced and dexterous finger work.

It’s hard to base an entire album around just two guitars without running out of ideas but the duio make a good go of it. Their musicianship can’t be faulted and the way the two guitars almost feel like one instrument because they are so in sync is a pleasure to listen to. It would be interesting to see what they could do with just another instrument or two layered in, but then again, it would take away from their unique sound.