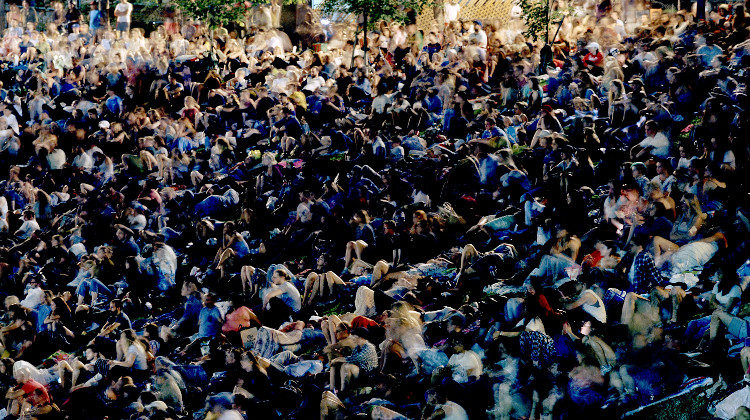 Even though keyboardist and guitarist Matthew Tavares announced his departure from Toronto jazz-post-rockers Badbadnotgood last October, the announcement of a spin-off collaboration with that combo’s saxophonist, flautist and co-founder Leland Whitty raised the possibility of the material being moulded less as catharsis than self-indulgent vanity project. Rest assured, as even a cursory listen will quickly quash any such suspicions: the free-flowing, organic and intuitive ‘Visions’ brazenly shifts cadences, moods and styles through its cauldron of eleven impressionistic and enveloping pieces, while mapping out dreamlike mosaic territory between mystical improvisation and gleaming composition.

As befits two veteran components of a cross-pollinating group who shifted its tone from album to album, ‘Visions’ moves, track by track, between a plethora of canvases, throbbing with the meditative grace of modal jazz, the drifting clouds of electronica, the unassailable swell of post-rock and the kinetic strut of lounge-soul. Their palpably simpatico relationship manifests itself in the rich colours of the soundscapes, with cushiony bass and filigree acoustic guitars rubbing up against gathering, exhortative storms of pulverising fury and extended forays into stirring catharsis offset by Tavares’s satin string arrangements.

Tavares’s piano and guitar and Whitty’s sax and flute come ably supported here by the fervent bedrock of a pristine rhythm section of bassist Julian Anderson-Bowes and drummer Matthew Chalmers. The quartet often takes the bare bones of an idea or a pretty sequence and proceed to bombard it with steadily increasing purpose and fire: ‘Blue’ is a classic example, careering as it does from a cornball, lounge-style strum to surging histrionics and back, with murder strings embroidering ominously throughout.

‘Visions’ commences with the blaring ‘Through The Looking Glass’, whose airy, meditative and Jan Garbarek-like prologue gradually unleashes a blistering, martial crescendo of vertiginous ferocity akin to an extended coda by the Canadian post-rockists Godspeed You Black Emperor! Straight away, the listener knows they’re in for something weighty and consciously cultivated.

This is followed by the aptly titled ‘Woah!’, a track which swims and shrieks between three distinct sections: a tumbling free-jazz opening segueing into a becalming, serene midpoint girded by the sonority of Tavares’s piano and the cotton wool of Whitty’s dreamier woodwind playing before the Coltrane-styled blitzkrieg in its thundering tidal breakdown. Here it’s lovely to hear the gleeful eclipsing of comfort zones and the ebb and flow of conceptual and musical horizons, with seething dissonance bleeding into velvet-crushed sounds and Tavares’ signature cosmic keys navigating skulking drums and weightier textures.

‘Visions of You’ is the record’s pensive centrepiece, a lyrical slab of spiritually inclined modal jazz that’s permeated by echoes of the great British composer Matthew Halsall before morphing into the liquid electronica of the Cinematic Orchestra; Whitty’s goosebump-inducing flute is rhapsodic here. ‘Eyes’ and ‘Heat of the Moon’ pivot around Tavares’s piano playing, solo and minimalist on the former, duelling and swinging with Whitty on the latter.

‘Visions’ is sculpted with immense energy and no little ambition; whilst it’s ostensibly cut from the cloth of jazz it uses its musical dressing up box deftly and without ever summoning the dreaded ‘jazz- fusion’. It will be fascinating to see where this takes them next.