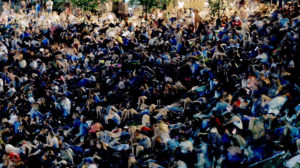 Former Badbadnotgood cohorts conspire to conjure mesmerising soundscapes which dip into jazz, electronics, post-rock and lounge-soul to thrilling effect on new album Visions. Even though keyboardist and guitarist Matthew Tavares announced his departure from Toronto jazz-post-rockers Badbadnotgood last October, the announcement of a spin-off collaboration with that combo’s … END_OF_DOCUMENT_TOKEN_TO_BE_REPLACED