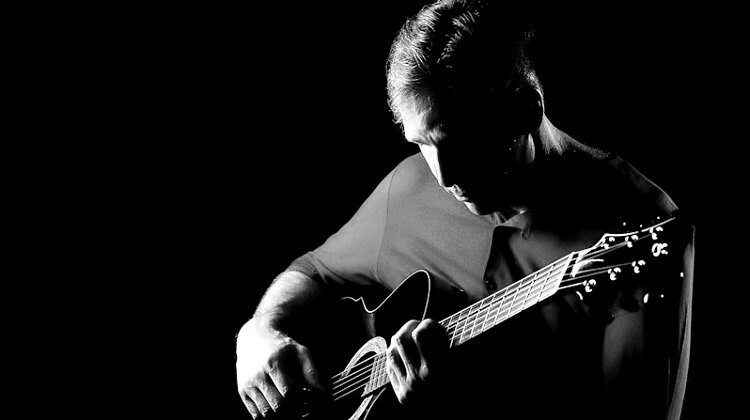 Mark Vickness creates a dual record of solo guitar and ensemble material to express the interconnectedness of humanity through music.

Three years after debut solo album Places, Mark Vickness is back with a record that takes in both his solo material and the use of his new ensemble, Interconnected. Mixing both his solo, fingerpicking compositions and full ensemble pieces was always going to be a risk, but it seems to have paid off on the interesting and vibrant record.

Starting off with ensemble piece Interwoven, the settled beauty is on full display as strings boldly lead the track forward amongst gentle guitar before suddenly opening up and changing pace. This changes the track’s sound into a more uplifting and thoughtful composition that ebbs and flows through baron spaces and gently building climaxes. It turns into a joyful opener that shows off the interconnections the record is named after.

Grey Skye then follows as a Mark Vickness solo piece, displaying the other side to the album. Vickness’s guitar playing and modern fingerstyle compositions feel full of humility and emotion with the artist having no trouble in creating imagery without words through the guitar. It reminds me of when ex-Blur guitarist Graham Coxon went solo and released The Spinning Top with his own unique playing style and allowed him to create an atmosphere that bent to his will.

The record kind of works in an ‘ensemble track then solo track’ style which can feel a little strange to begin with, but you do get used to it and start to feel the ‘interconnectedness’. Bodega Blue, another guitar piece from Vickness, shows off a bluesy sound accompanied with guitar taps for accompaniment which moves along in a smooth and jaunty manner. This Flows nicely into the more subtle yet epic 6 in 7 with its cinematic feel. You can almost see vast landscapes and deserted planes as the ongoing drone builds in pace and stature with the cello dipping in and out in an interesting way.

As the record rolls onwards you really do feel that growing sense of interconnectedness which Vickness mentions was born out of a deep reflection of the inner workings of life. For Every Child is a beautiful yet solemn piece that manages to create an atmosphere of transcendence, with album closer One Day Over A Thousand then pulling everything back into the solitary sound of gently contemplative guitar. It’s an interesting way to end, but almost feels as though Vickness is looking back on what’s come before with a nod to the power of the previous collaborations.

Interconnections is an interesting way to set out a record, and because of the strong musicianship in the ensemble pieces against the thought-provoking and warm guitar tracks, it just works. Yes, the two ideas could have been spread across two albums but this may have weakened the coming together of ideas that are experienced here as a whole.