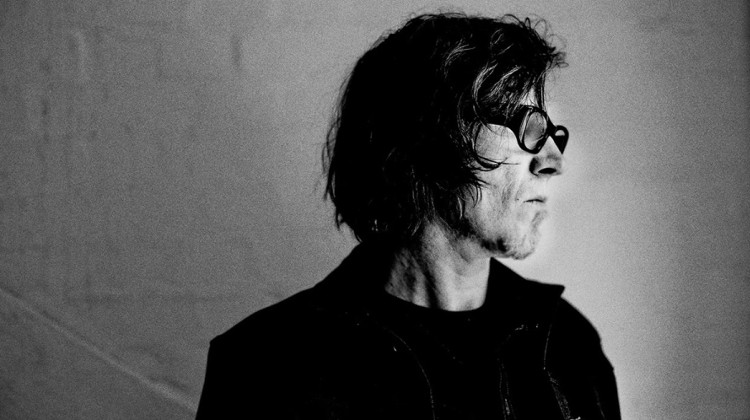 Mark Lanegan, the great 1990’s grunge survivor, draws upon a lifetime of wrongdoing, tragedy and dysfunction and navigates light in the darkness on his candid, ambitious and wounded new album.

The ex-Screaming Trees frontman Mark Lanegan is enjoying something of a cultural renaissance right now; his twelfth solo album, Straight Songs of Sorrow, arrives as a companion piece to his newly published memoir, Sing Backwards and Weep, and constitutes the gravel-voiced singer’s second album release in less than six months.

Rounding up a host of venerable collaborators, including John Paul Jones, Simon Bonney, Warren Ellis, Adrian Utley and Greg Dulli, Straight Songs of Sorrow represents a marriage of two distinct modes: the frazzled Gothic electronics of recent albums and the stripped-down folk leanings of his earlier material. Lyrically, this dark night of the soul is no jaunty stroll in the park: failed relationships, self-loathing, drug dependency, depravity and defiance of death litter the tunes as ghosts with which to wrestle and exorcise.

“My heart is black as night,” he confides on the invigorating and clattering opener, I Wouldn’t Want To Say, a visceral slab of nervy, Suicide-like electronica which powers along on a restless rattle of drums and a digital rush of loops. With Lanegan’s weathered and whisky-soaked baritone to the fore and sounding as stark and haunted as ever, it serves as a summation of the record’s chief themes: hope, addiction and cheating the reaper. By contrast, the sedate, Nick Drake-like Apples from a Tree, a delicate song of absence and yearning, takes flight around some supple finger-picking acoustic guitar by Lamb of God guitar-thrasher Mark Morton; sonically it could easily fit on 1994’s Whiskey For The Holy Ghost.

“Is it my fate to be the last one standing?” the veteran enquires on the gut-wrenching Skeleton Key, a churning dirge invoking the premature deaths of Kurt Cobain, Layne Staley and Jeffrey Lee Pierce. Elsewhere, the voluptuously abstract skitter of Internal Hourglass Discussion mines the same seam of jittery, vaporous electronic funk as Radiohead in their imperious period, all forlorn space-jazz-electro sound-scapes and icy wisps of subtle melody. Lanegan’s mix of organic and industrial is at its most alluring here, as a texture of radiant soulfulness emerges from the brooding strangeness.

Another highlight, the tender-hearted This Game of Love, pairs him with his wife, Shelley Brien, on what can best be described as a Nancy and Lee synth-pop ballad. The sparse acoustic lilt and nimble grace of the spectral Stockholm City Blues are engulfed by the gossamer beauty of Ellis’s expressive and fluid violin. Elsewhere, Morton extends the bucolic flavours on a lovely paean to Earth’s Dylan Carlson, Hanging On (For DRC), whose sentiment of survival proves one of the album’s most affecting: “By all rights, we should be gone/But you and me still hanging on.” The closing, feathery Eden Lost And Found, a stately ode to overcoming life’s obstacles, evokes a limpid grace which grounds the record in a note of low-key catharsis.

Straight Songs of Sorrow is not without its weaker moments of patience-testing and grizzle-rock by numbers. The torturous synth-blues grind of Ballad of a Dying Rover comes on like Iggy Pop reading out a shopping list, the colourless rant of Bleed All Over mumbles, grumbles and drags for what seems like an eternity and the Lou Reed-like shuffle of Ketamine quickly outstays it welcome.

Taken as a whole, Mark Lanegan delivers his latest work as a weighty examination of mortality, gratitude and redemption, an exercise in taking stock and making peace with a misspent past. With judicious editing, this would be a contender for album of the year; instead it constitutes a strong if uneven showing from a prolific artist still operating at full pelt.