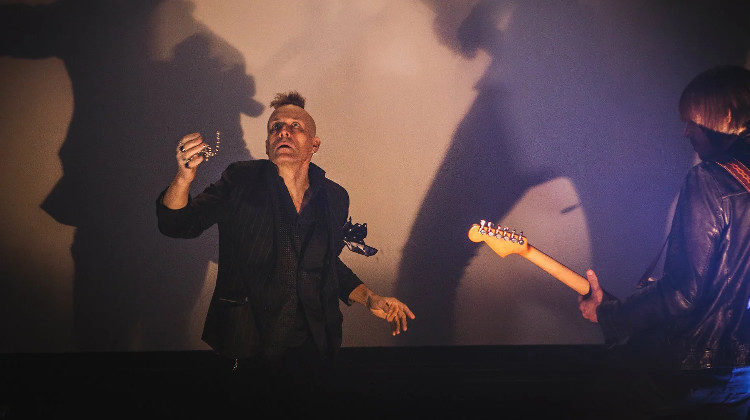 In Humanist, Rob Marshall manages to procure the vocal talents of industry stalwarts to breath life into his tailored and prominent music with a message.

When writing a record based around something that means so much to you, it’s hard to let go of some of the creative decisions. This is why Humanist is such an achievement. Rob Marshall, (guitarist for Exit Calm) conceived the idea for the record after watching Shane Meadow’s The Living Room – a documentary based around singer Gavin Clark who sadly died. Rob once shared a manager with Gavin and, being moved by the piece, wanted to write something himself to portray mortality, meaning and the liberation of the human spirit. The music of Humanist became his way of doing this, bravely bringing in other singers and lyricists to listen to the tracks, provide their vocals, and portray these themes over the music he’d created.

A sparkly but incandescent intro opens the record, ending with what sounds like underground train samples and holy vocals spliced together. This leads nicely into the more electronically labelled Kingdom featuring Mark Lanegan. Lanegan’s gruff and weathered vocals provide a nice contrast to the heavily tailored drums and synths of the opening before you’re suddenly hit with dirty, fuzzy guitars that disappear as quickly as they arrive. This intrusion awakens the mind briefly, fitting in with the spiky nature of the lyrics: “Doctor are you going to kill us, give us some medicine to take, I am sharp below the surface, I have love that you forsake.”

Depeche Mode’s Dave Gahan takes the reins on Shock Collar, this time starting off with gruff guitars and heavy beats for the artist to build around. With more of a melody, Gahan manages to bring out the sincerity in the music, feeling all of the source material’s pain and sadness as it builds to a chorus reiterating to ‘never lie’. English Ghosts then sees John Robb of The Membranes provide vocals in a sauntering and sneering piece that reminds of the dark, punk sentiment of The Kills. The monotonous rhythm created by Rob Marshall gradually comes out of its shell as if being birthed from a place of confusion and malice, builds and building to its lengthy conclusion.

The way Marshall has allowed free reign for the artists to convey the themes really makes for some pleasing moments throughout the record. Ride’s Mark Gardner perfectly provides echo-laden, lengthy soundscapes to the 90s indie nature on Where The Lights Go Out whereas Carl Hancock Rux of Portishead fame creates an undeniably eccentric mix of fast-paced, poetic conversing against blissed-out guitars and a rolling drum beat that grows in stature as it progresses. A true album highlight.

The record ends as it begins with Mark Lanegan signing off on Gospel, seemingly digging deep into the source material and tragedy around Gavin Clark. Full of emotion and powerful turns of phrase, his vocals dance around the tailored guitar that riffs in unison with the swirls of sentiment that billow throughout. The perfect ending.

Humanist is a beautiful coming together of music and vocals with each track telling a story in its own right. Although it was built around the tragic death of Gavin Clarke, it manages to transcend this and provide more of an overture to the human condition, depression, and how we act towards each other and its consequences. Each artist brings something new and unique to the skillfully produced music provided by Marshall, allowing each vocalist to perform admirably against the subject matter.