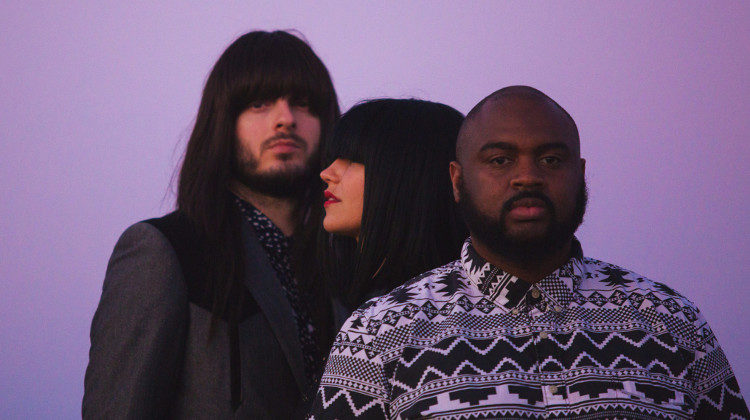 Khruangbin, the bewigged instrumental trio from Texas, wowed a capacity crowd at Brixton Academy with their soothing, hypnotic and atmospheric shoegaze guitar-funk soundscapes.

Laura Lee, Mark Speer and Donald ‘DJ’ Johnson, the Texan trio otherwise known as Khruangbin, have truly crossed over beyond their ardent, though cult, following, judging by their rapturously received show at London’s Brixton Academy, a hallowed portal accommodating a healthy five thousand punters. Named after the Thai word for ‘aeroplane’, Khruangbin purvey a slinky, languid and sedate style of mostly instrumental chill-funk which draws from the G-funk strand of hip-hop, classic soundtracks, the brooding basement soul of Isaac Hayes and sultry Middle Eastern grooves.

Dressed to the nines in gold and turquoise like a human glitterball, Lee anchors proceedings with her steady bass and occasional, reverb-infused sighing whilst Johnson taps out a metronomic beat and the besuited Speer conjures a giddy joy from his guitar jazz licks that approximates a surf take on Hendrix or Santana. It’s the sort of smoothly refined and swaying music that gets characterised as ‘pool-side psych’ or more offensively, Spotify chillout play-list fodder, but which unveils its myriad charms with repeated exposure.

This year the band have built upon the confidence and profile established by previous Father John Misty support slots with their widely acclaimed Con Todo El Mundo album and its dub-wise sister release, Hasta El Cielo. Tonight’s biggest shouts and cheers are reserved for smoky material from these records: Como Me Quieres, Como Te Quiero and the Curtis Mayfield-flavoured Lady and Man twinkle with a tactile sensuality and each musician is perfectly in sync with each other.

The group are no shrinking violets and know how to work a crowd, at one point imploring the audience to introduce themselves to the person next to them and asking them to shout out the name. Avid scholars of 60’s and 70’s sounds, they are also adept at incorporating chunks of old hip-hop, house and disco into their dreamy improvisations, a canny trick that prevents the evening from descending into a mood of one-paced homogeneity.

As ever, I came to Brixton Academy unaware of the commercial reach of such a niche act, but it’s evident that today’s streaming culture of musical pick ’n’ mix works to the advantage of such rarefied fare: Khruangbin’s idiosyncratic art is manna from heaven for those attuned to the ravenous eclecticism of our century.