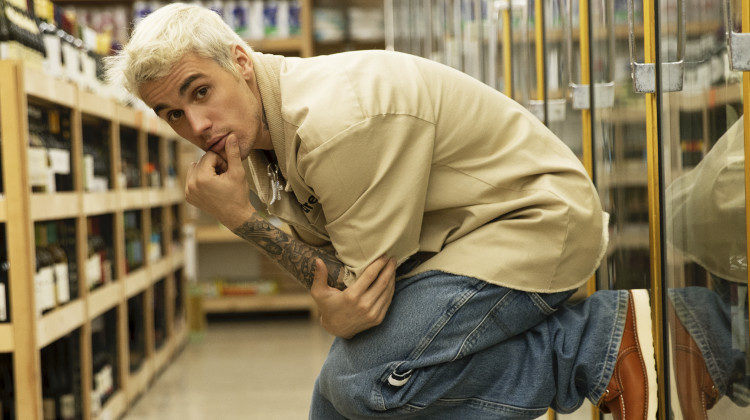 New Justin Bieber record Changes is an album of redemption, and his cherubic voice is an instrument of God: the big sexy God of Holy Matrimony.

New album Changes from Justin Bieber isn’t brazen enough to be a huge pop hit, nor sexy enough to be a great R&B album, nor flashy enough to fit the Drake mould. So what is it? It’s highly sensitive, perhaps of greater similarity to the blurred Soundcloud atmospherics of the Swedish ‘Sad Boys’ collective, springing as it does from the lean-drinking, pill-popping, wrecked body and mind of a troubled young celebrity. But this is an album of recovery, of loving and relying on your wife unconditionally; it stands somewhere related to current American pop trends, but out on its own: Charity-trap, Incel-Hymns, Anxiety-anthems.

The sonic palette throughout Changes is warm and paddy: bouncy like basketball courts, benign like ringtones. In a recent Youtube series documenting Bieber’s struggles with addiction and Lyme disease, it was revealed that he regulates his mental and physical wellbeing by zipping himself into a hyperbaric oxygen chamber, intended to increase the brain’s oxygen supply and reduce stress. For the most part, as on Habitual and All Around Me, the production captures the feeling of uterine submergence in this oxygen chamber. Listening is like dipping your head beneath the bathwater.

What’s notable on Changes is the clear vision and consistency. When Justin Bieber sings “though I’m going through changes / It don’t mean that I’ll change” he signals his growing sense of responsibility. The album’s core is a committed thematic preoccupation with the devotional experience of marriage, with the songs representing slight variations on a specific kind of love and comfort: a mark of strength, not weakness. The album is not about falling in love, but the all-encompassing love of God represented in marriage. Having love define your routine (Habitual), be a refuge from the world (Confirmation), a source of anxiety (E.T.A) and an alleviation of anxiety (Available). Bieber ascends before our very eyes.

These thematics are couched in the musical form of stripped-back R&B. Come Around Me, a lights-down slice of hot pie, proves that sensual pleasure is not a forbidden fruit, but a central pillar in the Church of Bieber. “Let’s get it on expeditiously / pull me down aggressively,” Bieber pipes, prepubescently. Throughout this album, Bieber also exhibits an absurd and garrulous lyrical capacity. For example, on Intentions he praises his wife’s “heart full of equity,” which is a strange, yet honestly meant complement. Most of these songs are more silly than sexy. Yummy, which has attained Tik Tok ubiquity, may placate the Grand Inquisitors of Bieber’s record label in its popularity, but the less said the better about its toe-curling sexual suggestivity. Bieber literally cannot help writing a catchy hook, even if the hook best suits some sort of randy Japanese advertising vampire. Running Over is the worst offender in this category, with the ‘comedy-rapper’ ‘Lil-Dicky’ somehow sounding lamer and creepier than his name prepares you for: “I got all up on your IG and was scrollin’ down for hours / I got back to 2015 and you started lookin’ young, so I stopped (Ooh) / Post intercourse when you walk by (Ass, ass, ass).”

On Take It Out On Me, sex is therapy: “I’m your psychiatrist / Let’s talk about it / We can use sign language / I know your body.” Bieber’s personal struggles bely a confusion and a thwarted attempt at expression at the heart of his life, or, more accurately, his neuropsychic balance. The conventions of matrimony are what provide a vocabulary and a framework from which to build an album and a personality upon, a narrative for Bieber’s private and professional lives.

Similarly, E.T.A’s sultry R&B vibe disguises the fragile young man behind the boards. Making music is portrayed as his outlet for anxieties and emotionality: “just trying to amplify the sound to drown out all this need for you / Biting my nails got me nervous so anxious.” Reminiscent of Ariana Grande, Bieber layers and combines vocals, building Disney castles in the sky with his vocal runs and bird-song melodies. In the space of these songs, vocal gymnastics are not showing off, but supportive, and affirmational: Bieber’s voice comes to his own aid. It’s good because Justin Bieber is really not making these songs for anyone but himself. He has all the joy of a Joey Essex with incredible vocal talent.

Intentions is the real earworm on Changes; the beat is pure trap for babies. Once a frightening little teenage star, Bieber is finally comfortable and being himself. Many of these songs are luxuriant and unassuming, extremely pleasant, if a little forgettable. But Intentions hits the sweet spot between ode to contentment and cool banger. On another highlight, Available, Bieber’s producers seem to have hacked into James Blake’s MacBook and ransacked his ‘Happy Meditative Church Service’ Sample Folder. The plaintive, high-flying vocal range that Bieber has retained from his emergence into worldwide popularity is the perfect form to embody his Wife Guy thematics. Available is full of anxiety indicators, desperation and loneliness. Bieber expresses an un-masculine, nearly Incel ideology.

But Bieber’s distance from, and indifference to, the commercial success of this album produces some incongruous features: the tracks with Travis Scott. Kehlani and Post Malone are easily the worst, as Bieber’s personality fades into the background. They disrupt the private, emotional pattern of these songs. Far more rewarding is At Least For Now, which sees Justin Bieber break out into a near-yodel proclaiming his love. Justin Bieber’s voice oscillates between the joyous and the whimsical, occasionally hinting at the anxious. He expresses extreme clinginess and strips the corrosive masculine sex drive to its origins in the child, merely seeking comfort. Changes is an album of patience, to be cherished.