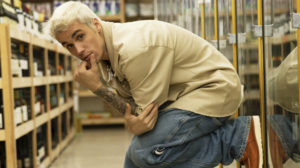 New Justin Bieber record Changes is an album of redemption, and his cherubic voice is an instrument of God: the big sexy God of Holy Matrimony. New album Changes from Justin Bieber isn’t brazen enough to be a huge pop hit, nor sexy enough to be a great R&B album, nor flashy enough to fit the Drake mould. So what is it? It’s highly sensitive, perhaps of greater similarity … END_OF_DOCUMENT_TOKEN_TO_BE_REPLACED