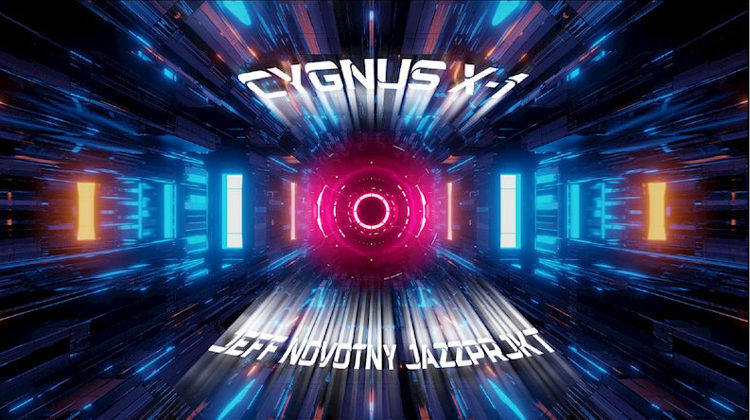 Phoenix, AZ-based modern jazz composer Jeff Nonotny has no lack of ambition when it comes to music. His new ‘JAZZPRJKT’ inspired by high concept jazz fusion boldly mixes styles that others wouldn’t dare, mostly to good effect if you’re in the right mood to get swallowed up and spat out the other end. New track Cygnus X – 1 is a good example of the artist’s talents with instrumentation and clever harmonic ideas, all tied together with ruthless drums that build and flow at will.

Starting with static noise against a delightfully eerie atmosphere, the high concept jazz fusion sounds comes into play as a guitar intro that turns into offbeat synths and confusing flows. It’s a wake-up to the senses that pulsates forward as drums barely hold the track together in a tantalising way. The sound then breaks down into a psychedelic section tumbling through the rabbit hole before building towards a more coherent psyche-rock piece reminiscent of King Crimson or Frank Zappa.

At 15-minutes long the track meanders through different styles and clever connections t, not giving the listener a chance to breathe before moving onto the next idea. Jazz fans and classic psych-rock fans may be used to this kind of atmosphere, but for others, it may be a little harder to follow. You have to be in the right frame of mind, but if you are the track really comes alive and wakes up the senses. The instrumentation is enthralling throughout and the way the drums later control the track is exemplary.

Personally, it gets a little cluttered at a point near the middle, but there’s a perfect breakdown section that appears just before the music loses too much control. This then gently builds again, calling on pent-up anxiety as sax plays against guitar before synthy keyboards hit on a full release and rise to the forefront. If you’ve survived right through to the end, you’re treated to a more mellow and haunting finish that fades away against eerie soundscapes and a slowly fading menace.

For those of you willing to be taken on a psychedelic, jazz-fuelled journey of musical discovery, Cygnus X-1 by Jeff Novotny is a mesmerising mix of sounds, genres and rhythms all held together with a wandering yet playful drumbeat. It’s one of those tracks you’d have to listen to a few times to get the benefit from, but if you’re willing to, you’ll find something new and interesting each time.