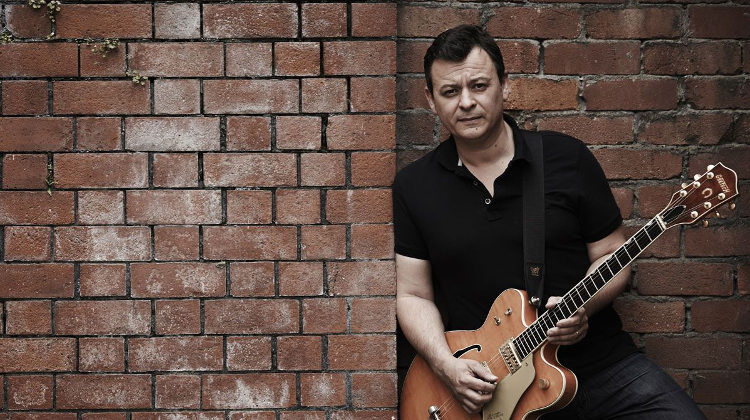 James Dean Bradfield has created something special with his second solo effort, Even In Exile. When Patrick Jones –  brother of Manics bassist Nicky Wire – came to Bradfield with a handful of poems based on different aspects of political activist/singer Victor Jara’s life, he was struck with the idea that if life means anything, it will continue after death. Even In Exile is a way for Bradfield to keep these ideals and thoughts alive through Jara as the record guides the listener on a mesmerising journey that draws on the past to protect the future.

Recuerda opens with settled guitar strings and a haunting melody reminiscent of Jara’s own style before mercilessly slipping into a faster paced, bigger sound that flows forward with an energy only Bradfield could provide. The politically charged nature sets up the tone of the entire record with lyrics mentioning the Chilean mining disaster as well as closer-to-home messages on Bradfield’s home country of Wales. The intensity ebbs and flows against big Manics-fuelled guitars one minute before settling down to those Spanish guitar picks then hitting home hard. A mesmerising opener.

The Boy From The Plantation flows in a beautifully powerful way as Bradfield once again brings in personal experiences mixed with lyrics based around the early life of Victor Jara. The gentle use of harmonica adds that extra layer of prettiness needed to freshen the sound, with the guitar work once again intermittently breathing life into the track. Under The Mimosa Tree strips things back, content without lyrics and building slowly into a well-structured and dreamy soundscape of ideas.

With ten original compositions, Bradfield also adds his take on a melody created by Victor Jara himself on La Partida. This further creates a bond between the stark contrast of styles that effortlessly work together – Jara’s soulful, haunting tones against Bradfield’s all encompassing energy and power. It’s meant as a tribute to Jara, with the layered vocals and guitar riffs providing a substance that hits hard and builds mercilessly.

The underlying messages of political uprising and the danger this creates for the individual are wonderfully realised and portrays just how much one must give up to influence the right people and be heard. The Last Song pulls on Pink Floyd influences in melody and atmosphere, allowing Bradfield to take the listener on a well-tailored journey amongst powerful yet informative lyrics: “Untie the noose, raise the ladder, one step at a time, being afraid to climb.” Santiago Sunrise then finished the record nicely with a flowing and tempestuous energy that builds, falls and uses a few simple piano structures to hold everything together.

Even In Exile is as much a musical biography as it is a beautifully realised set of twisting and turning soundscapes. James Dean Bradfield has carried Victor Jara’s messages to the beat of a new drum, but also managed to preserve the dexterity and sound of Jara’s original melodies. The messages littered throughout are things we could all do with hearing in this tense and politically dangerous time we live in, showing that empathy can go a long way.