Ikes Creek’s debut record Up, Rising provides the soundtrack to the band’s lives, using country, blues and bluegrass as a basis for a fun and interesting record.

A plucky attitude and fine musicianship can only get you so far in the industry; on top of this, you need the songs to back it up. Ikes Creek have no problems on this count, being a band of strong musicians who know how to write a decent tune. Debut album Up, Rising manages to call on genres including blues, country, folk and bluegrass and combine them so seamlessly that it seems as though they’ve been doing this for years, even though they were only formed in 2017.

Count on You starts off the record with acoustic guitar paving the way forward amongst rhythms akin to Fleetwood Mac’s Rumours period. The country, rootsy vibe is perfectly suited to the reflective lyrics that singer Korey Simeone sprouts with energy and competence: “As I walk through this life sometimes good friends let me down, but I kept on pushing through no matter who might stick around”. The sound is further heightened in the foot-stomping chorus with the energy and complexity of the track growing as it continues. 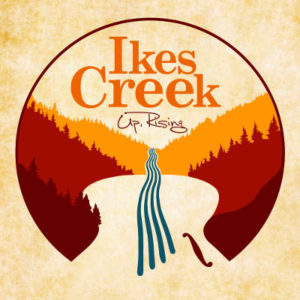 Proud carries on in the same vein, but with more of a rolling beat providing the structure and a bluegrass vibe completing the atmosphere. The track jumps between these various styles which is all pulled together by powerful turns of pace and tight musicianship. Carved in Me provides some of the strongest melodies on the record along with some heartfelt lyrics, but perhaps falls slightly on providing a chorus as good as it could be to pull the track together and really make it stand out.

What Ikes Creek do well throughout the entire record, is making the sound feel so homely and welcoming that anyone can just pick it up, listen and feel comfortable. Paper Airplanes is a sincere, electric and poetic piece that plays off on the band’s strengths, whereas the bluesy attitude of Run Rabbit Run, starts off as a warming track before transforming to a fun and fast-paced bluegrass dance-along that would only keep the smile off the face of the most hardened soul.

The record ends with Fires Coming Down (Kenny’s Blues) providing, once again, that rolling, twisting beat as vocals and music play a ‘to and fro’ amongst sliding guitars, fun, story-based lyrics and an energetic attitude. The perfect way to end the record.

Up, Rising is a strong debut from a band that knows the direction they want to go in and not afraid to try new things. The record seamlessly switches from blues to bluegrass to country without a care in the world, managing to do it with style, grace and skill that seems ahead of their time. If the band can provide a bit more clarity to the lyrics and bring a bit more dynamism in places, their future will be a bright one.