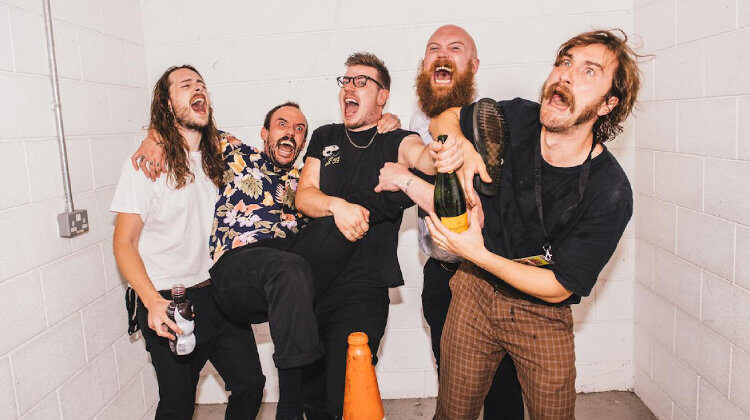 IDLES really did really spring from nowhere with 2017s debut album Brutalism, and what’s great about them is they’ve worked extremely hard to get where they are. Just as with bands like The Libertines, IDLES’ fans feel like they’ve taken a journey with them, mirroring their views, passion, and rage against the machine. Singer Joe Talbot et al have that penchant for hitting on sour subjects with honesty, comedy, and enough venom to kill in seconds. Add into the mix their fight against toxic masculinity and you have the grounds for an escalating musical revolution, which is exactly what new record Ultra Mono is.

From the opening of track War, the brashness and power of the music is on full display once again, a home away from home when it comes to IDLES’ immense style. Bass piles forward, drums follow suit and fuzzy guitars enter the hectic fray as lead singer Joe Talbot shouts “WAHCHING! That’s the sound of the sword going in”. The band truly is going to war. The track just overtakes whatever room you’re listening in as it gets louder and more frantic; band members shouting, short and erratic drum solos hitting home and screams of “THIS MEANS WAR” against jagged guitars. It blows the mind, but in usual IDLES fashion, they still manage, somehow, to keep everything succinct and catchy.

Previously released track Grounds follows with its gentle, synthy riff highlighting new arrows to the band’s bows. We’re treated to their well-trodden path of political insight and intrigue here as Talbot scolds “Not a single thing has ever been mended by you standing there and saying you’re offended.” It’s the call to arms and action highlighted by the first track but pushed home by the second. For those 80s kids out there, track Mr Motivator will bring back memories of multi-colored spandex and star jumps before it flies forward on its punk mentalities, bringing out a fun side with a myriad of name drops and cliches, even mentioning Delia Smith and cookies. It’s IDLES’ ease in which they can mix fun lyrics and insightful passion which really makes them stand out.

Kill them with Kindness is where things start to get different. A gentle piano opening tricks you into thinking this will be the softer side we’re about to see before a thumping beat and grungy guitars take over. The excellent Model Village then shows off the band’s penchant for catchy riffs against all the rage and wit we love about them in this chaotic and perfectly paced merchant of noise and chaos. “I beg your pardon? I don’t care about your rose garden” shouts Talbot before continuing a rant about small-minded mentality, consumerism, and the ‘one-up’ attitude.

As the record bombs forward, there are a couple of moments where you can take a slight breather (and I mean slight). Carcinogenic has a gentler pace before arriving at a mercilessly chaotic chorus, but A Hymn is where we are really treated to a more subtle sound. Concentrating on high-pitch background guitar work and steady bass, Talbot reveals his deepest insecurities and passions in a way only he can amongst clever quips and emotion pouring out of the vocals. This is exactly why people can relate to them and why they’ve become poster children for deconstructing male masculinity. The record ends with the anarchic and beautifully shambolic Danke: a three and a half minute, mostly instrumental piece that ends with Talbot’s troubled whalings before cutting out into nothingness.

Ultra Mono shows a band both progressing and improving their sound. It’s something that many artists fail to do in such a strong way, but with IDLES’ penchant for honesty, fanning the political flame and shouting out to a world that needs a voice, they’ve done this with ease. The rage and chaos of the music is what heightens the senses, but backing this up with insightful lyrics, clever one liners, unashamed honesty and brash uniqueness is what makes IDLES one of the UK’s most powerful and interesting bands.