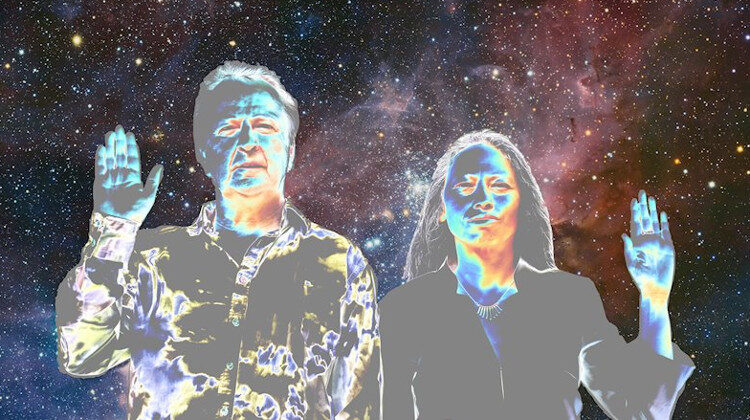 London-based psychedelic prog-rock duo High Chair are ready to unleash their flavoursome and fruitful sound on new album Hey Mountain Hey. The third in a trilogy of album releases, some of the lyrics throughout the record were actually demoed way back in the 1990s and only found their way back into their music recently. This has led to a distinct past meets present sound that encapsulates a broad spectrum of music.

Starting with the longest track on the album at over 6 minutes long is a brave move, but Stargazer is perfectly justified. From the opening Beatles-style psychedelia mish mash a silence proceeds and then we’re thrown into heavy, fast-paced drums and a sound that warps from chaos to psyche/prog rock within an instance. When the guitars and vocals kick in properly you’re reminded of past greats such as Black Sabbath mixed with Pink Floyd, but also more up-to-date production bringing in hints of The Mars Volta. The vocal track may seem a little out of place at first, but it grows into the sound as the track continues.

The much more contemplative Tree and Leaf follows showing a different side to the band with acoustic guitars playfully moving the track forwards and singer Billy Surgeoner’s vocals feeling a lot more comfortable in the setting. That ethereal atmosphere is then once again taken away during Chrome Trees as stylised beats and echo-laden guitar provide one of the more radio-friendly tracks that is heightened by sporadic synths and playful bass.

As the record moves on it feels as though the band have a little more room to experiment, and it’s not the all-out prog/psych rock album you may have been expecting. Once Again is almost classical in nature but still has that rock/pop melody that fills the atmosphere. Breath of Life (Black Wolf Lament) then goes back to the dark and sinister with industrial beats and a menacing flow that changes direction at the drop of a hat. The record ends with an amalgamation of synthy flows and raw guitar work that perhaps doesn’t pull together everything the album has offered but still delivers a catchy chorus amongst strong guitar work.

Hey Mountain Hey from High Chair delivers an eclectic mix of music that perhaps could have settled on an underlying theme to bring it all together. Having said that, whatever style they hit on they usually pull off. The raucous opening may settle down later on in the record, but there are plenty of intriguing moments to enjoy.