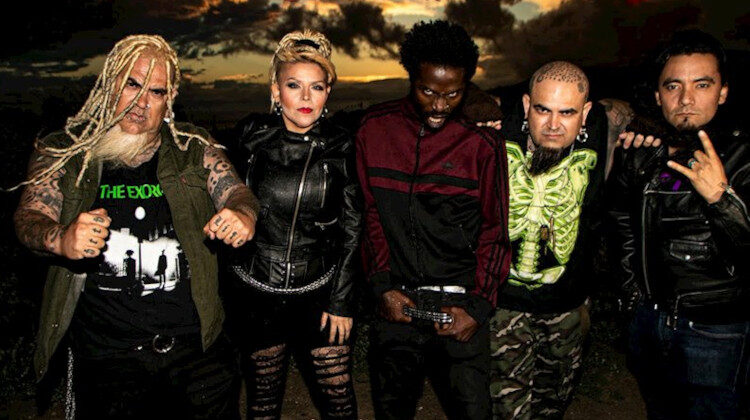 Heavenly Trip to Hell unleash the beast on their hard-hitting EP, Pumpkin Man.

Californian Industrial Metal band Heavenly Trip to Hell really know how to get their fans going. With tracks full of inviting energy, big sounds and real-life struggles, they are able to form a kinship with those that are willing to be sucked into their metal-based world. New EP Pumpkin Man is a real treat for those fans, showcasing exactly what the band are all about with engrossing stories, dark moments and skillfully realised songs.

Starting with the EP-titled Pumpkin Man, we’re straight away thrown into frantic guitar work, energetic flows and an aggressive atmosphere, further impaled into your mind when Gerardo Christ’s screamo vocals envelop all that dare listen. An intermittent guitar riff sets apart the sections of the track well, allowing for a sense of purpose as the track builds into a more frantic and hedonistic pace and guile. It sets out the purpose of the album well, to thrill yet remind people of the dark side of rock ‘n’ roll.

Vivid Dreams follows using an interestingly synthy beginning to lead in once again to that powerful, full-throttle atmosphere of hammering guitars, heavy drum work and an attitude filled with menace. The vocals are given a clearer space to be heard here, allowing a story of struggles, darkness and danger to be fully realised. The track features some of the most pronounced guitar work on the EP with sections allowing the track to unfurl itself in a settled yet emotional way.

With two tracks remaining, you would expect more of the same from the band, but Systematic does throw in something a little different. Starting with a spoken-word section introducing a stark warning of an imminent threat, this is played out against raucous guitar and drum work, the bass leading the listers forward ruthlessly against police sirens and rioting sound clips. The opening does give the track more presence but perhaps helps cover up an overall sound that is less interesting than the previous two tracks. It does, however, manage to continue the dark atmosphere created and the heavy metal harmonies with Vicky Viscious that pop up work well. The EP ends with Artuo Huizar, the most melodic track on the record, delving full throttle into a tainted mindset that rallies their fans into an all-encompassing call to arms.

Pumpkin Man from Heavenly Trip to Hell is a hell-bent journey into dark mindscapes of injustice, dangers, and all-out tragedies. The band are experts at their sound and know their instruments well, leading Christ’s vocals forward in a way only able to be realised by a band that has been together for a long time. With only momentary lapses of presence, the EP is a well-earned journey that industrial metal fans will enjoy.