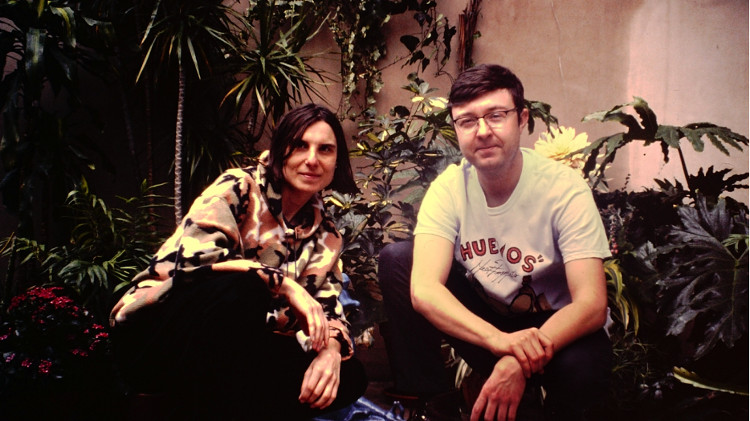 Gum Country have arrived and they’re not taking any prisoners as they storm onto the indie scene with their rousing debut album, Somewhere.

The LA duo have created a thrilling sound that makes you dream of a COVID-free land where we can all finally go to a bar and listen to live music again. This album sounds as if it has been created by a five-piece band with a plethora of tunes hitting you from every single direction; it’s creative, it’s exciting and it’s certainly what indie rock music fans need in their lives right now.

Foot tapping and head nodding are a constant when you’re listening through this record. Courtney Garvin’s voice is brilliantly flowing and Connor Mayer’s musical talents and versatility shine through. The two share a great musical chemistry and it’s not to be taken likely; if Somewhere is anything to go off then this duo have a very bright future ahead of them.

Opening with an absolute banger in the album-titled track, Somewhere, Garvin’s talents on the guitar are utilised well when combined with a simple but effective drumming beat. It’s fast-paced but it certainly doesn’t overwhelm. Following the opener, the pace slows down a little as tracks The Queen Rules and Tennis showcase a consistent use of drums that can be heard throughout the whole record. Soon after, There’s A Crumb emerges and changes the dynamic of the record, Courtney Garvin’s vocals more fluent and Mayer’s use of the keyboard is clearly heard for the first time, splitting the album up extremely well.

The midsection is reached when you hear I Don’t Stay Up, with lyrics more distorted. This seems to be a common theme and it suits the duo’s style down the ground. Following this track Pills plays with a similar vibe and feels as if both songs could merge into one. Clear and more prominent use of the keyboard can be felt and Garvin’s exploits on the guitar are showcased well, providing listeners with a breadth of instrumental talent.

Gum Country seem to have a moody yet energetic approach to music and this is particularly felt in the perfectly made Brain Song, a track that can be considered a highlight of the record. A chorus rings out as Garvin repeatedly asks “is there a brain inside my head?”, these gloomy lyrics are accompanied by a melodic fusion of foot-stomping beats, fierce guitar tunes and consistent use of the keyboard throughout. This theme continues with the following track It Lives It Breeds It Feeds, a song that contrasts heavy beats with unpredictable lyrics. The album’s artwork is simplistic, yet the duo’s style certainly is not and you can hear this the whole way through.

The record approaches its close with Woah Oh and the goofily titled track Talking To My Plants, they may not be the duo’s best work but they certainly sit well on the album. Jungle Boy then picks up the pace again as it brings back that energetic flow that makes the record such a joy to listen to. It precedes the final track well and reminds the listener of Gum Country’s sound is all about. We then reach the climax with Waterfall, and after listening through a bundle of tracks that consistently change the pace, it feels as if you’ve reached the end of a journey. It is almost certain that this track will sound great live and it would be wise to finish shows off with it as well.

As debut albums go, Somewhere by Gum Country is 100% one to watch out for and in many years time it could well be remembered as a classic. It lifts energy and casts the mind to memories of live music which can only be considered as a great thing, especially as we’re currently living through such a crazy year.