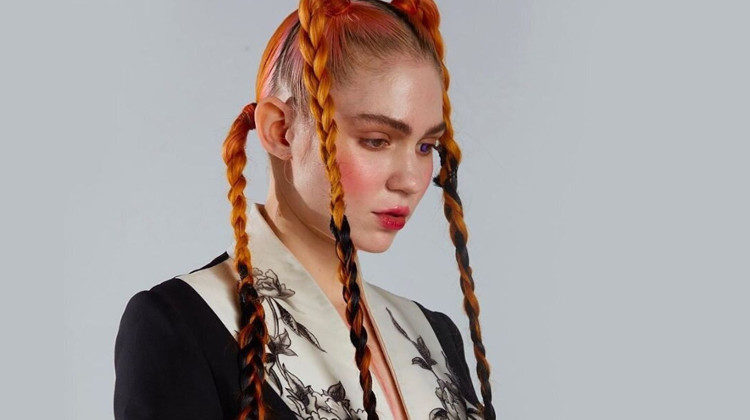 Grimes’ vivid science-fictional faculty is put to staid and naive use on Miss Anthropocene, where jagged electronica is more pish than punk.

Grimes describes her new album, written from the perspective of the Demon Goddess of Climate Change, as “an exercise in villainy.” More than mere exercise, considering Grimes’ romantic affiliation with the real powers shaping humanity’s future on Earth, her aestheticisation of the climate catastrophe obscures the accountability of American Capitalists, with their eco-fascist belief in unfettered progress. She has been widely criticised for her ‘artistic’ desire on Miss Anthropocene to “make climate change fun,” and her only affection is for “a digital and cement lifestyle.” This one-dimensional devotion to technological “progress” and posthumanism, the kind that can be found floating about on your average 4-chan forum, results in a similarly one-dimensional album.

The end of the world really kicks off with Darkseid, which channels the dystopian, bass-driven rebellion of M.I.A. and slaps some autotuned Chinese language vocals on top to add a frantic fourth-world vibe; it’s a little clichéd and boring. The evocative steam-punk environment Grimes inhabits, neon-lit and controlled by a shady black market, is often less forward-thinking than she thinks it is. Elsewhere, Grimes stakes a claim for 4 am as the coolest, most Godless point of the early hours. 4AEM’s Saudi falsetto and hustling n’ bustling garage breakbeat evoke the desert dive bars of Tatooine or a Middle Eastern Market, then, at the chorus, the song spins 180 degrees and legs it down 72nd Street, headfirst into one of those 90s leather raves where everyone’s got green hair and licking each other’s faces, with particularly demented individuals staring down the barrels of pistols in an act of insane disregard for the World of the ‘Normal People’.

The madness continues on My Name Is Dark – Art Mix (don’t forget the ‘Art Mix’). “The boys are such a bore / the girls are such a bore / I never trust the government / And pray to God for sure,” Grimes sneers. Tension builds through the pre-chorus and chorus as we descend into hell. A murky swathe of guitars soundtrack an alien transformation in the deep, dark corners of a Charli XCX show, where teenage shop assistants grow scales, bite the heads off of their fellow clubbers and spit them back in the faces of their ancestors.

The most straightforward pop song on Miss Anthropocene steps out of the darkness and into the sunlight. Delete Forever’s best setting would be early evening on a Coachella Saturday. Accompanied by a campfire chord progression and lazy banjos, Grimes cosplays as Marcus Mumford after a serious benzodiazepine addiction, before shapeshifting into a bubbling Swedish House Mafia button-presser for the chorus: vocals melting into breathy washes of smoke floating across the field. The disparate festival crowd comes together after a long day on the beer in the sun, sharing conspiracy theories about chemtrails and how Deal or No Deal is a government-sponsored mind-control program. They bellow Grimes’ immortal words back to her: “Flew into the sun / fucking heroin.“

Grimes is at her most comfortable when she’s revelling in the dystopian world of New York art-club freak-out, where the end of the world is performative. You’ll miss me when I’m not around is a bit more interesting. The combination of celebrity emptiness, subtly grungy guitars and suicidal lyrics (“I’ll tie my feet to rocks and drown / You’ll miss me when I’m not around”) is like Kim Kardashian on a rampage having just finished The Bell Jar. Another standout moment is when Grimes creates the urgent sense of hurtling over Sonic the Hedgehog super-highways at the speed of light on IDORU. With this song, the album’s redeeming closing note, Grimes celebrates the landscapes of a new world, rather than fixating on the ashen remains of the old. The undulating, metronomical movements of a rotating cast of instruments imply vast aquiline horizons or a city in the clouds. These dreamings are a brittle, positive, Utopian inverse of an overwhelmingly average and unnecessary bleak album.

Miss Anthropocene’s concept is weak and barely perceptible when dragged out to album length, the only consistency being derivative notions of rebellion and appropriation. Grimes, through her fraternisation with and possible alien impregnation by Elon Musk, has become the 50-year-old’s idea of what a ‘meme’ is. Great bands may have flirted with the aesthetics of controversial political ideologies in the past (Joy Division’s early fascist stylings), but these are often avowedly political. Grimes, on the other hand, has a starry, anime-eyed admiration for violent powers; she dehumanises the potent threats of Capitalist power and furnishes Elon Musk’s ideological mission with an aesthetic framework. Only with the return of nature and bird song on IDORU are we treated to an alternative vision of the future.