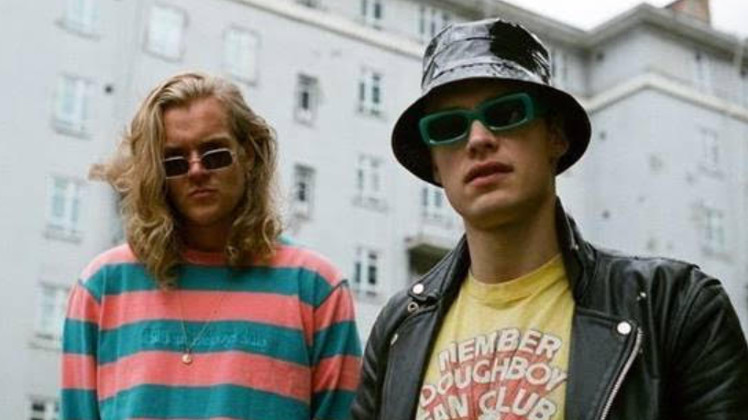 Exploring life in contemporary England, RICH from Good Health Good Wealth is an enigmatic and welcome slice of ingenuity.

London-based duo Good Health Good Wealth really know how to get your attention. Formed by vocalist, songwriter, and producer Bruce Breakey alongside Lithuanian guitarist and producer Simon Kuzmickas, the duo manage to unite a rough and ready sound amongst clever dialogue, genre-bending creativity, and the landscape of a contemporary London on their debut EP, RICH.

Starting with previously unreleased track Alright, the song depicts a portrait of modern British masculinity against a backdrop of fast-paced beats, energetic guitar riffs, and dreamy soundscapes. Breakey’s innovative vocal stylings flit from faux-rap to London-laced spoken-word before the chorus hits in all of its punk-influenced brashness. Big guitars build and enter the fray with Breakey’s vocals following suit, piling on the menace as they belt out  “How are you? How are you eating how are you sleeping, dreaming of me”. It’s a mesmerising opener that shows off what the band are all about.

Following track, Love Hangover builds on the more emphatic side to Good Health Good Wealth with a slower, atmospheric escalation of lofi sounds against settled beats. The beginning feels a little reminiscent of Squeeze’s Cool For Cats before guitars open up to a more dreamy flow and hit home with a sentimental pop-laden chrous.

All I Want Is Everyone To Love Me then mixes things up once again with an almost dubstep drum beat against drilled down vocals and an additively brash soundscape piling forwards. Portraying a commentary on the highs and lows of social media, Breakey’s vocals swagger through the track, finding rhythms where others would miss against inventive, tongue-in-cheek lyrics: “What have you got to thrill me? Another picture of an avocado”

The EP Finishes on Guinness, a synthy, ambient slow-builder that draws on settled flows before a spaghetti western-style guitar riff builds over thumping drums and spoken-word vocals. It’s addictively sincere and playfully powerful. The chorus then brings the track alive against layered vocals and we’re once again treated to Breakey’s lyrically dry humour brought to life with that London-tinged enigmatic pronunciation: “Tatty old patterned shirts selling at stupid prices, much too clever to get suckered into that fish tank”. It’s a strong closer and one that will leave the listeners wanting more.

RICH from Good Health Good Wealth does what any decent debut EP should, by offering up a slice of what the duo are all about and leaving you wanting more. Lyrically astute, playfully enigmatic, and with rhythms and melodies that think outside the box, it’s an EP of ingenuity that leaps ahead of a music scene that’s at a stage of potentially turning stale. Here’s looking forward to a forthcoming full-length.