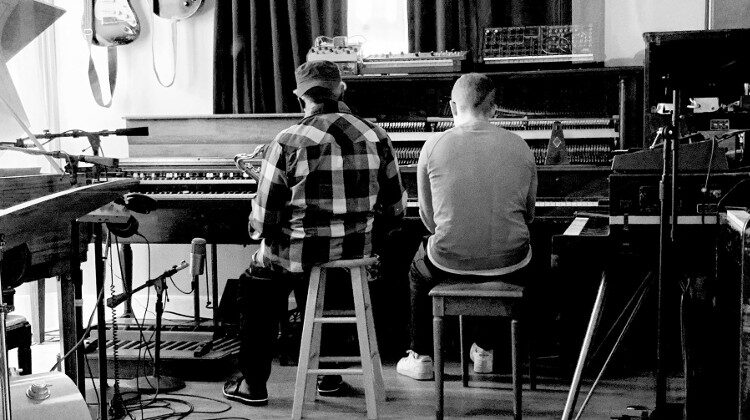 The electronic producer Floating Points and the octogenarian jazz master Pharoah Sanders harness the majesty of healing, atmosphere and expanse on their beautiful, sweeping and subtly realised hook-up with The London Symphony Orchestra, a recording that achieves spine-tingling and transfixing  effects with a thoughtful and sparse application of its core ingredients.

The British electronic artist and composer Sam Shepherd and the pioneer of cosmically inclined spiritual jazz Pharoah Sanders make for natural musical bedfellows. Since emerging as a gilded acolyte of John Coltrane and Sun Ra in the 1960’s, the eighty-year-old saxophonist has been a colossus of the avant-garde whose influence has seeped into the corners of any music claiming an affinity with the expansive and the exploratory. Meanwhile, in drawing from post-rock, ambient and jazz, the thirty-four-year-old Shepherd has transcended his dancefloor origins and cultivated a niche as a purveyor of tactile electronica that raids the devotional and dreamier end of the musical spectrum for inspiration.

Both musicians have consistently exhibited both an appetite for brooding contemplation and a liquid approach to genre and pigeonhole, and it has seemed an inevitability that the latter would concoct a project with a free-jazz titan and a full orchestra. However,  despite the chops and credentials of all involved, this Third Stream cross-pollination is the sort of thing that can easily misfire.

Rest assured that their collaboration – a concerto for saxophone, electronics and a twenty-nine-piece string orchestra that’s been some five years in the making – is an unreserved triumph, a revelatory soundscape that’s both rueful and ecstatic, marked by sustained repetition, verdant atmospherics and inexorable climaxes. Where lesser artists might have been tempted to indulge their inner prog and chuck everything at the canvas, Promises achieves lift-off and a masterly cohesion through its adroit restraint and even reticence: Sanders’ sax attack can be growly and grandiloquent but here it’s mostly warm, introspective and serene, whereas his collaborator has reined in his wiggy instincts and cooked up a spiralling, celestial suite of clarity and calm that leans more towards 2015’s debut, Elaenia, than anything else in his catalogue.

Composed of a suite of nine movements, Promises flouts the modern orthodoxy of cherry-picking and playlisting; this is explicitly modular music-making of rising tension and sweet release, designed to be ingested as a whole. Intermittent echoes of the work of Alice Coltrane, Don Ellis and Stan Getz’s Focus spring up throughout, but this is commanding, ingenious and dextrously engineered fare that stitches together its own bewitching patterns.

Shepherd and Sanders lull the listener in gently as their cosmic suite commences with the first gasps of a twisty, tinkling keyboard arpeggio phrase that flickers and then strengthens throughout the disc. When Sanders’ snaky and glistening tenor sax heads into town, he imparts a rich, churchy tone and a sense of humble, meditative enlightenment to the enterprise whilst the strings of the LSO resonate like a flare across the moonlit sky, suggestive of both wonder and calamity.

At every turn, Promises works as a considered, unhurried work of accommodation and allusive beauty rather than a clumsy bolting together of disparate elements. Shepherd conjures a sensation of sweeping radar melody employing pensive impressionism and soft colours, with Sanders’ ebbing waves of tenor sax given wings by unexpected leaps of synths and whirlpools of burbling keyboards. The sixth movement heralds the apex of the orchestra and some lightning strike propulsive momentum; elsewhere the string section creeps up on you like progressive thunder.

Promises never feels like a box-ticking exercise in fusion, indulgence and bluster; it plays out like an empathetic conversation between kindred spirits searching for communion, an elegiac, autumnal sound-painting beyond words.