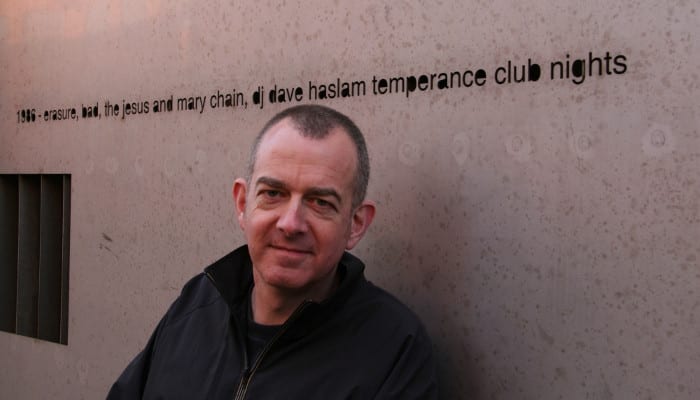 New book A Life In Thirty-Five Boxes details the life of DJ Dave Haslam and how he came to the decision to sell his entire record collection.

DJ Dave Haslam of Manchester Nightclub ‘The Hacienda’ fame is set to release a new book detailing his record collection that spanned 40 years of his life, and how he came to the decision to sell it in its entirety.

Titled A Life In Thirty-Five Boxes, the book looks over his many years as a vinyl collector. Beginning in his youth and finding records for the first time, it goes on to cover his DJ career as he builds his way up to playing at Manchester’s legendary Hacienda nightclub in the 80s and 90s.

It then continues by talking about what many record collectors will see as sacrilegious: selling his vinyl collection. Haslam is able to go into detail about how this process started, meeting with potential suitors for his collection and the reasons behind his decision to sell. It also looks into our attachment to vinyl and how each record we own can show us a part of our own story.

Haslam has had a long and varied career, not only being a DJ who has played over 450 times at The Hacienda, but has written for a variety of music and news publications over the years, also publishing other well-received books, including the recent Sonic Youth Slept On My Floor.

A Life In Thirty-Five Boxes is released on 13th June through Configo Publishing.

Haslam has also set up a live event in conjunction with the book’s release where he’ll be discussing his lifetime of music collecting, talking through details covered in the book and taking part in a panel-session. You can buy tickets for the event held at Manchester’s Gorilla venue which takes place on 17th June.