Home » articles » Deftones: Adrenaline – Marching To Their Own Beat 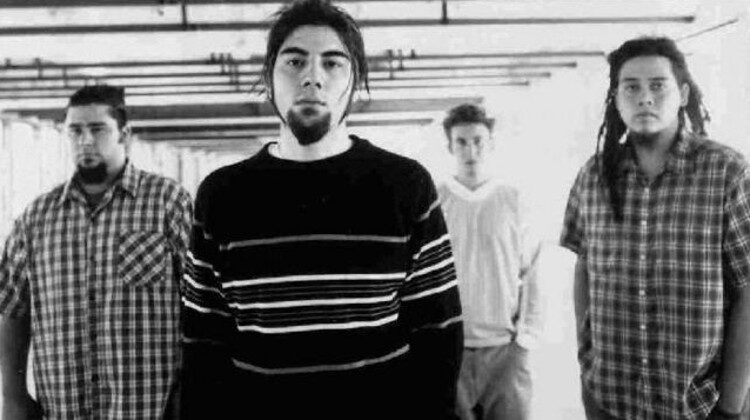 Off the back of releasing Ohm, Deftones’ critically acclaimed ninth album that gained a Vinyl Chapters five-star review, we take a step back in time 25 years and revisit the band’s debut album, Adrenaline.

The single biggest mistake you can make regarding the Deftones is to pigeonhole their sound or the music they write. Whether it be ‘90’s alternative’ or ‘nu-metal’ the Sacramento natives have shaken off and transcended any form of musical genre or label.

Formed in 1988 by high school friends Chino Moreno, Stephen Carpenter, & Abe Cunningham, the Deftones spent the first five years of their existence going through multiple member changes and building up a following in the local metal scene. The band line up stabilised in 1993 after the return of Cunningham to the drum stool and adding Chi Chong on bass. With that, the band grew in confidence and popularity and started to branch out their gig area to include San Francisco and Los Angeles.

After recording a demo and sharing the stage with other like-minded bands such as Korn and Coal Chamber the four-piece started to appear on the radar of all the major record labels. A three-song showcase was all it took for Chino and Co to ink a deal with Madonna’s label, Maverick.

The Deftones entered the studio in 1995 with producer Terry Date, renowned in metal circles for putting to tape bands such as Dream Theater, Soundgarden and Pantera. This was the beginning of a working relationship that would see Date produce most of the bands studio releases. The album was recorded at the Bad Animals Studio in Seattle, Washington and was released to the world in Autumn’ 95.

Adrenaline is a dark and brooding debut offering from Deftones. The guitars are heavy, the riffs are chunky and groove-ridden, whilst the rhythms are low and driven. Yet there is a softer side brought to the mix in the form of the vocal stylings of Moreno. He brings dynamics to the music when the song is void of it. He is more than just singing the verse and screaming the chorus, which would become a contrived industry standard in later years.

The band lock together superbly. The arrangements and mix by Terry Date captures the raw intensity of the four-piece outfit. Like many first LPs you can hear the influences blurred between the lines of the music. But this does not overshadow the tone of a band still discovering their own sound. Every palm muted chord chug is a tip of the hat to those metal pioneers.

There are some real diamonds shining though this giant of an album. Opener Bored is a triumph in letting the listener know what to expect. The sonic ebb and flow has all the highs and lows that drive human existence. 7 Words is a funk drenched F**K YOU to the world. Then There is Engine No, 9, a dingy, grimy dancefloor filler which would get the coolest of skate kids grooving and jumping on each other.

Adrenaline was not a commercial success straight from the release; a constant touring schedule and an undercurrent of fan’s word of mouth saw this album up to 220,000 copies sold. Deftones’ later success would see the sales driven up to over 1,000,000.

The Deftones in this album really spearheaded a change in the heavy metal genre. Like many cases the first band does not always get the recognition those who travel the path they blazed do. Deftones would follow up with the critically and commercial Around the Fur which successfully led them to even greater outings such as the untouchable White Pony.

From Adrenaline to Ohm, Deftones have owned their individual sound and marched to the beat of their own drum. They have been as uncompromising as they have been evolutionary. Chino and co started off strong with their debut album and have only grown in strength and power ever since. After 25 years, Adrenaline has not missed a step or dropped any yards. It is as fresh and relevant as it was in 1995. This is a testament to the band who will no doubt continue to walk their own path for as long as they wish to. May that be for a little while longer yet.