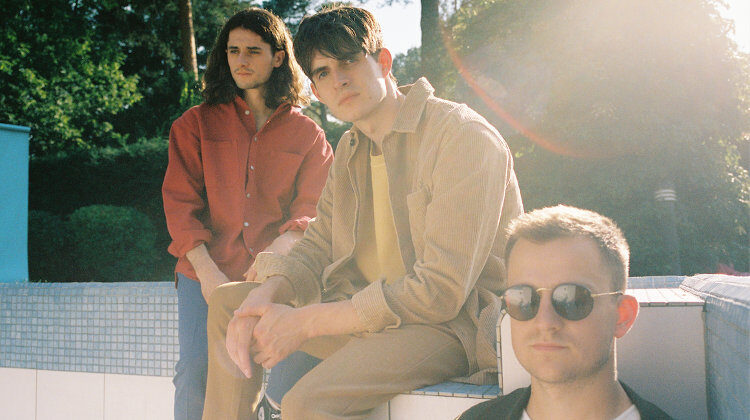 Cassia frontman Rob Ellis talks to us about what it’s like being in a band during lockdown, living without the live scene, and what they have in store for 2021.

Cassia are one of those bands that like to work hard. Undertaking long and emphatic touring duties before being locked down due to the pandemic, we find vocalist-guitarist Rob Ellis keen to talk to us about the band’s current state of mind, what we can expect from new music, and their mindstate during the craziness of 2020.

Hi! So, Cassia are a relatively new band on the scene. Can you tell us a little bit about how you all met and how Cassia was formed?

Rob Ellis: Me and Lou (Lou Cotterill – bassist), we met at school. We didn’t really hang out that much though because he was in the football crew and I was in a different group; we were in two separate halves of the year. Anyway, after school, we started jamming because he worked in the same place that I did. We met Jake (Jacob Leff – drums, vocals) in Wetherspoon’s and he joined once we realised Lou wasn’t that good at playing the kick drum. Lou used to play the kick drum, bass and sing… it used to be well funny. The rest is history.

Obviously, we’ve been in and out of lockdown for a while now. How has this affected Cassia? Have you been able to stay motivated?

RE: We’ve definitely been able to stay motivated because we are all living in the same place, or have been the majority of the year. We all get each other going. That’s the benefit of being in a band, shit happens and you’ve still got your bros so it’s pretty cool. Motivation isn’t really a problem, it’s been a little bit of an escape because we are so used to playing live and we’ve never really had a break so it has been cool.

Has it impacted the way you’ve written songs and the topics they cover?

RE: I think I’ve definitely had more time to listen to music because before I never really did so much. Through doing that we have attempted to evolve into something different so I’m actually mega excited. It’s been the most time that we’ve spent just writing music. In some ways, it’s been really crap because obviously, you can’t go out but in other ways, it’s been the best year we’ve ever had.

Let’s talk a bit more about the music. Cassia recently performed your single, Do Right, in a steam room. How did that come about?

You have a new EP, Powerlines, scheduled for January 2021 and a new album hitting in the Spring. Can you tell us anything about the new songs?

RE: We’ve got a lot of them coming. We just haven’t stopped writing and now we are producing everything ourselves and recording everything ourselves. It’s something we’ve always dreamed of doing because we’re all a bit nerdy, to be honest. It feels like when these go out we have been there every step of the way so it’s really our thing. It’s something to be proper proud of. But yeah, a lot of tunes are coming.

When you do write your songs, does it usually start as a jam session or do you write individually? What’s the process?

RE: We actually do it all individually for a period of time. We then get a load of tunes because we all write different songs about different things. We either pick someone’s tune because it sounds sick or we combine them which is really interesting. You can get into odd structures and all different things, but we’ve only just started doing that. That’s the method behind it though and we find it works really well for us.

Do you always write from your own experiences or have you ever written from someone else’s perspective?

RE: I like to imagine what things are like as someone else and do things that way because it does allow you to create a more interesting outlook. At the moment I am just sitting inside like everyone else. It’s quite important to do that, especially nowadays.

Cassia had been touring a lot before lockdown. What was it like living on the road? Did it feel more like home or was it always quite surreal?

RE: It’s hard to say. We played so many shows I think I just forgot. We were looking at footage from when we went to Europe and all these different places and sometimes I just can’t remember turning up to a place because we were just packing them in. We were doing so many of them. It did feel like you start to lose perspective a little bit.

I remember when we were coming out of our last EU tour and I was like, I don’t know what to do now. You have that feeling because you get back and you see your family and everything and you’re like, ‘oh wow, that’s finished’. So it does feel like home in that way because you meet all these different people and do all these daft things. It’s amazing. It’s probably the best bit of it. I do miss it.

Could you explore the places you went or did you go straight to rehearsals and dressing rooms?

RE: I think towards the end you just went to soundcheck and then you have your break. We were driving a lot of the time so we didn’t really get much sleep. I remember once we had our album launch in Manchester. We then drove to Prague and did a two week EU stretch which was a 10-hour drive between shows. We then drove back to play London, back to Manchester and then over to Ireland in three days. I think I had 2 hours sleep a night. We could see little bits, we couldn’t see loads of the place. Sometimes we had four-day stretches, like in Paris which was really cool. I had never been to that place either. It was definitely nice when we had a bit of time.

Was it easy to keep yourself entertained during these 10-hour car journeys?

RE: I wouldn’t say it was easy. I remember one time I forgot my headphones because I always forget stuff. I had 12 hours sat in the same van with the same people! It’s pretty grueling, I just try to sleep most of the time. The guys, a lot of the time would play chess, you know, proper cool. It would actually get pretty heated between Jake and Lou! They proper started hating each other because Jake was really good at it and Lou would narrowly miss winning each time. Sometimes it’s great because you get a van with a PS4. Kinda nerdy things I guess. We weren’t sitting in the van drinking beer, I guess that’s for a different band. It was good fun.

Do you miss it now that you’re in one place?

RE: No, I think it’s really cool because we have all moved to Berlin. My girlfriend lives there and she offered us a place to stay. It’s a beautiful house with a studio. I think, in some respects, I’ve been really happy here and different stuff has happened. I’ve definitely enjoyed it being home, it’s been quite nice.

As I’m sure you’ve experienced, bands have really suffered with the non-existent live scene this year. Do you know when you’ll be able to play live again?

RE: We’ve booked this tour for April, but I feel apprehensive. I don’t think it’s going to happen but we will see. Honestly, when we booked it and our agent said yes we’ll do it, we were so excited, we thought it was so sick. It’s going to be a fresh set, new tunes. I guess it’s the only real reaction we get besides being in the bedroom playing tunes with your mates. It’s like you can get a proper reaction from it.

Would you say that’s the  best part of being in a band, playing live?

Anyone you enjoy listening to at the minute? What about any guilty pleasures?

RE: What I’d stick on in the car which is pretty funny is The Three Nationals. Proper vibe music.  I also listen a lot to Dominic Fike. He’s very cool. He’s an American guy, the production is crazy, that’s like a huge influence for me going into more lyrical stuff. Guilty pleasures? Harry Styles. I think he’s great! I love his music. But I don’t think that’s really a guilty pleasure anymore because he’s gone cool, hasn’t he? But yeah, probably him.

What can we expect going forward, what’s next to achieve on the list?

RE: It’s hard to pinpoint it. I remember the one thing I wanted to do when I was younger and when we started was to play Glastonbury which we still haven’t done. As soon as I can play that then I can quit! So I still think that, I’ll always gun for that one thing. That’s keeping everything going. But I hope we can play those gigs in April because I think that will be a much-needed thing for us all, just to go out and see people.

Hopefully, people will like the new music we release too. That’s the main thing. As long as they’re liking it, enjoying it and they’re happy then it’s all good. It’s going to be weird when you see people dancing at gigs again. I’ll never go backstage and complain that I had a crap gig, I’ll always be buzzing. I’m really excited.

As we are Vinyl Chapters, are there any vinyl fans in the band? Any favourite wax you enjoy spinning?

RE: Yeah, vinyl is pretty cool. The studio where we record has over 3000 vinyl records and obviously we start playing them. They’re mostly 60s music and since then I’ve got really into it. There’s something about vinyl, especially the artwork. It’s just really cool. I really like it. We released a load for our first album and there’ll be a load more coming for the new music, I think it’s something that’s really important.  There’s a band I enjoy playing on vinyl called The Smoky Robinsons. I think they’re a Motown group. I always put that on because it’s really groovy and head-bobby.

Cassia will be releasing their upcoming ‘Powerlines EP’ in January 2021 with their new album scheduled for Spring of the same year. Check out their steam room performance of ‘Do Right’ below.