Singer/songwriter Carley Varley, like any musician worth their salt, has started from the ground up and built a cult following through hard work. From busking on the streets of Lymington, Carley was asked to start performing in venues and gradually grew her fanbase as people undoubtedly began to see her talent. This has all led up to the release of her debut single Won’t Say Sorry, focusing in on energetic indie-pop as a basis for her brand of empowerment through music.

Opening with a bright, plinking guitar riff, the track exuberates a passion that is amplified as the rest of the instruments kick in. Her vocals have an air of indecision in them as she sings of troubles in a close relationship: “Not speaking is getting us nowhere, I need a friend and you are not there. Maybe I spoke way too soon, maybe I should reconcile with you”. This is all turned on its head as the guitar-laden chorus kicks in with Carley shouting ‘No!’ and dispelling all thoughts of forgiveness, getting rid of any doubt in her mind and realising she’s not the one in the wrong. 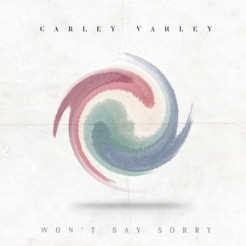 This strength of mind is all played out with more than a tinge of 90s indie-pop as jangly guitars burst forth. Perfectly accompanied by a floaty and slow-burning bridge, this allows the track to breathe a little and contemplate the singer’s mindset. The production is perfectly tailored as the track is thrown forward by electric guitars, and the sound not being so clean that it takes away from the attitude.

Carley made a decision to change the lyrics at the very end of the track to “Now I’m sorry” which could leave the listener perplexed as to why she adjusted her mindset this late in the track. It leaves us wondering if she’s sorry for the situation or the fact she’s being too harsh. This doubt in mind could, on the one hand, be seen to take away from the strong-mindedness, but on the other shows contentment and willingness to let the past go. Whatever it stands for, it seems the singer has grown emotionally by the time the track ends.

Won’t Say Sorry is an addictive and catchy song that shows a bright future for this rising artist. For many, the 90s high energy indie will bring a much-needed break from the pretentious indie-pop we hear often in the charts, and others will enjoy the strong mindset it gives off. The ending may feel a bit contradicting for some, but it does make for a bit of interest in the very last words of the track. A strong effort that ticks all the boxes.