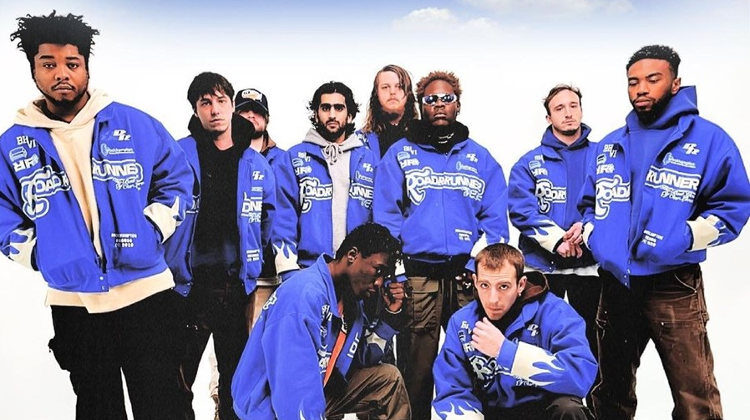 This release ventures into new sounds for the group, whilst simultaneously staying true to BROCKHAMPTON’s signature style. Through thorough exploration of the theme of finding “the light” in your life, ROADRUNNER takes the thread of positivity holistically; although, this leaves the overall cohesion of the album a little lacking at times.

BROCKHAMPTON make use of a sample-based, noisy lo-fi production style for opening tracks BUZZCUT (feat. Danny Brown) and WINDOWS (feat. SoGone SoFlexy), akin to that of Beastie Boys and Public Enemy. This influence is also reflected in the lyrics, which consist of fragmented but detailed lyricism delivered with a grounded, consistent flow. This approach is engaging, unpredictable and complex – allowing for a continuous flow of cryptic thoughts and ideas in a short space of time.

WINDOWS becomes an experience in itself, through 6 extended verses interpolated with interludes, bridges, choruses and an outro. Among the complex structures and lyricism, however, is a persevering thread of humour and realism. CHAIN ON (feat. JPEGMAFIA) earnestly discusses police violence but is also embedded with humour and pop culture, with references ranging from That’s So Raven to Vine; ending with a sample of Wu Tang’s C.R.E.A.M.

ROADRUNNER: NEW LIGHT, NEW MACHINE is defined by its emphasis on positivity, asserting numerous times that “It’ll be okay, no matter what they say about us” (COUNT ON ME). In THE LIGHT, however, this positivity turns to honesty, as Kevin Abstract admits “I still struggle with tellin’ my mom who I’m in love with”. Eventually, the root of this overt positivity is addressed on DEAR LORD, as bearface leads prayers for fellow band member Joba’s healing, following his father’s suicide. Indeed, this is a beautiful tribute, but the journey prior to this is, at times, challenging.

On OLD NEWS (feat. Baird) lines such as “I did this all for you, what more I gotta prove?” and “Wish I knew what it meant when I said I loved you”, combined with cleaner production, shift from thoughtful and profound to uncomfortably intense. Moreover, the creativity and unpredictability of the opening tracks is lost by track 9, WHAT’S THE OCCASION?, which boasts bland repetitive cyclical structures. The physical release boasts extra tracks, which begs the question of what direction BROCKHAMPTON could possibly take given that by the end of these 13 tracks, the whole gamut of human emotion has been covered?

Despite its flaws, it is hard to be overly negative about an album that emphasises how “The light is worth the wait, I promise” and frankly discusses homophobia and police brutality (The Light PT. II). While this album is mostly excellent, these occasions of intensity let down the overall tone, leaving a sour after taste.