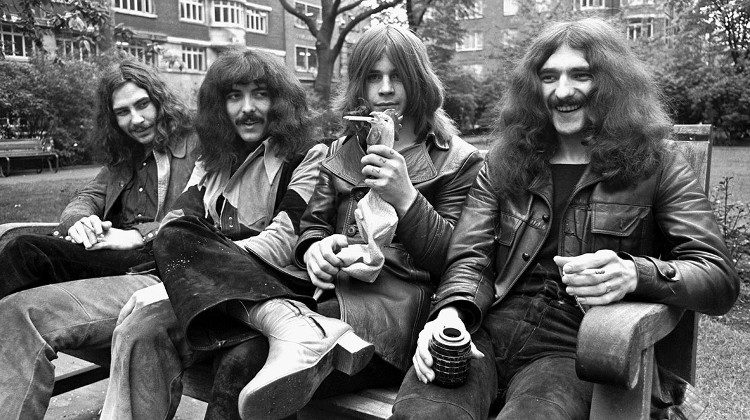 This February, the debut release by Black Sabbath turns half a century old. Vinyl Chapters looks back at one of the greatest paradigm shifts in rock history.

From the darkest corners of Birmingham, England, four men emerged bringing heavy guitars and their bleak view on the world with them.  Black Sabbath’s self-titled album was a new beginning, not just for the band but for the music industry. Formally a blues band named Earth, Sabbath rose to power by mixing overdriven riffs from Tony Iommi with unmistakable vocals from Ozzy Osbourne all held up on the giant shoulders of the rhythm section; Geezer Butler on bass and Bill Ward on drums.

Black Sabbath – Black Sabbath opens with the title track; Black Sabbath.  As the sound of rain, thunder and church bells tolling in the distance fills your mind with impending dread, the musicians launch into the song with a slow, eerie riff. A riff that is simply and effectively based around a G bar chord. The effect is chilling. When Ozzy’s voice joins the fray, all hell breaks loose. His haunting tone fits the Geezer Butler written words perfectly. The slow groove ends up turning into a gallop as the song comes to an end.

In track two, Sabbath break the rules that have not even been set yet. In The Wizard the band harken back to their blues days with a harmonica taking centre stage with guitar licks in the intro and chorus.  Within the verse the fearless four-piece lay down a heavy rhythm, building on the opener.

N.I.B. is the birth of Heavy Metal. The track opens with a Wah Bass solo nicknamed ‘BASSically’. It takes a lot of the guile and balls for a bassist to play a bass solo on a record, especially your first. It may seem like a mainstay in this day and age, but back in 1970, it was vertically unheard of. That bass solo and the distorted bass intro is just the start as the drums and distorted guitar kick in. Inspired by Cream’s Sunshine of your Love, Nativity in Black is the polar opposite of the blues supergroup hit. It tells the tale of sorrow and fallen angels. The music has the perfect tempo and evokes what Black Sabbath are now infamous for: strong emotion.

I have wondered many times over the years, whilst playing this album, how it would have felt to have listened to this LP for the first time without any prior knowledge, or experiencing all that had come afterwards. The thought gives me Goosebumps.

Even before the record starts spinning, the hopelessness of the cover art, depicting women in black in front of an Oxfordshire watermill puts you in an uneasy place before the needle even drops.

The sheer list of bands, scenes, genres and movements that have named Black Sabbath as a direct influence is endless. Even in music journalism, it’s hard not to compare or to hear Sabbath in a lot of heavy music. To this very day, there are shades of Black Sabbath in any band under the metal umbrella.  Black Sabbath would go on to build upon the success of their debut album. They would release album after album of heavier and darker songs with poignant and thought-provoking lyrics. Many covet their second album; Paranoid and its title track, but Black Sabbath is the inception that all heavy metal has grown from.  In one masterstroke, this Birmingham quartet had not just snatched up the brass ring and become Godfathers of a musical genre not yet named, but in an act of immaculate consumption, gave birth to a music defining moment. These two sides of vinyl changed the shape of the musical horizon forever.