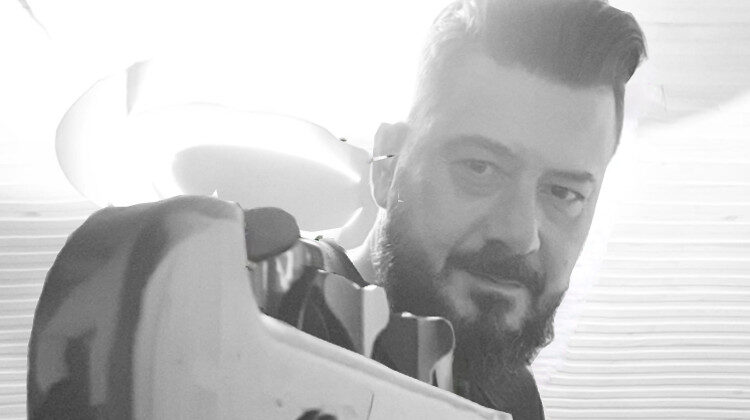 Liechtenstein-based doom metal artist Black Reuss, aka Maurizio Dottore, is not afraid to show off the fragility of emotions. His album Metamorphosis is exactly what it says on the tin: a slowly divulging record that ends with a complete transformation of energy. It’s more subtle than that, however. At first listen you might not recognise those changes, but the heaviness, sadness and down-trodden nature of the record gradually lifts as the album moves onwards.

Starting with the synthy intro of Incomplete, organs are then added before you’re suddenly walloped around the face by a wall of electric guitar that hits like a freight train. This leads into a heavenly choir accompaniment, building on an 80s heavy metal atmosphere with a dark edge. Dottore’s vocals then enter the fray, providing the downbeat, melancholy lyrics that bring the track to life. Grief follows, hitting us with those big guitars straightway this time, feedback trailing off as bass drums clear the path forward through the darkness and misery.

The Doom Metal flow throughout the record is heavy and raucous, really pulling on the melancholy heartstrings as Dottore delves even deeper into sadness and heartache. Anger, as you’d expect, leans heavily into that emotion, with the music really portraying a bubbling and exploding atmosphere that really comes alive in the chorus. Zeal is probably even more hard-hitting, turning to heavy riffs to guide the track forwards before ebbing back down in sections to allow the track to simmer amongst the melancholy. It’s a nice technique that works well.

For all the embellishment of misery and pain, as we get to the deeper cuts in the record, you sometimes feel that these emotions begin to be portrayed in a more seductive way. I can see that Dottore wanted to build an overall sound to portray the transformation aspects of the album and it works well.

The second half of the album is a lot brighter; even the song titles begin to lift the spirit. On Love sitars and a heavier psych-rock sound create a wonderful coming together of styles that works well, swiftly followed by Joy, a powerful, full-on 80s metal sound rushing through to its big conclusion. The record ends on the short but powerful Exodus – Outro to Journey, starting where we began by building a mix of synthy beginnings before guitars take over and hit home hard.

Metamorphosis by Black Reuss is an album that guides the listener forward through stages and emotions of one man’s life. It doesn’t ease you in, instead hitting you with heavy material that is pretty dark but put together in a powerful way. The record gradually comes out of its shell, the darkness clearing yet the power remaining as you get to the end of the record. In a way, it’s a concept record that feels as if a lifetime has been lived out through an entire record.