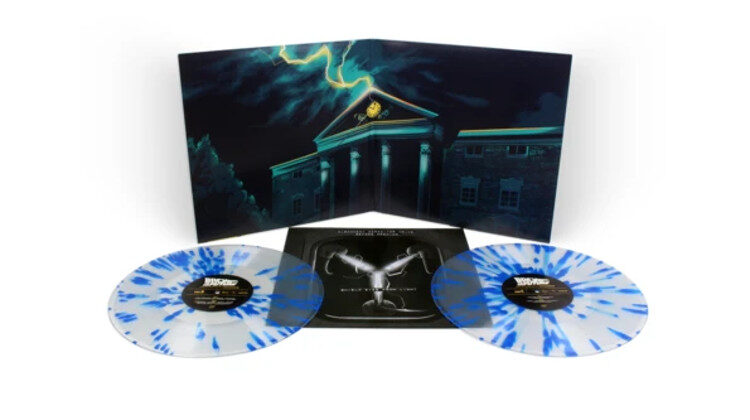 Take a step back in time to Hill Valley with the wonderfully packaged score for Back to the Future, captured on vinyl for the first time.

If we’re talking about movies of the eighties, it’s likely that whoever you ask, Back to the Future will make an appearance in their top ten. Everything about the film just worked. The cool and instantly likable Marty McFly who every teenager wanted to be. The crazy scientist Doc Brown who builds a time machine out of a DeLorean. Traveling back in time in said time machine to try and make sure your parents meet so you will eventually be born. The special effects were revolutionary, the script is often described as one of the most perfect ever written and the soundtrack was both mesmerising and instantly memorable.

It was composer Alan Silvestri who was tasked to score the movie, and what a job he did. Over his career, Silvestri has provided the score for movies such as Forest Gump, The Avengers, Lilo & Stitch, and Stuart Little, but one of his early and most memorable scores was, of course, for Back to the Future.

Never before released on vinyl, Mondo have created a package for this fantastic score that would make Marty say “This is heavy”. Spread over two 180 gram clear discs with an electric blue splatter (a black vinyl edition is also available), the records sit within a delightfully illustrated gatefold housing. The front features a hand-drawn image of our titular hero Marty McFly playing guitar in silhouette; you’re able to make out his famous ‘life preserver’ jacket as he’s pulling out a big solo standing on a giant clock face. It’s a lovely call back to the scene where Marty plays Johnny B Goode on stage at his parents’ Enchantment Under the Sea Dance in a bid to make them kiss for the first time. On opening the package you’re hit with a foreboding painting of the famous Hill Valley clock tower being struck by lightning, standing out against the dark blues and greens of the electrifying image.

The music itself is as mesmerising as when you first ever heard it watching the movie. Spread over four sides and coming in at 24 tracks, it really is a trip down memory lane that instantly reminds you of key moments from the film. ‘85 Twin Pines Mall has anticipation and fervor with fast-paced stops and starts, thundering wind sections and a sense of purpose and struggle; it fits in perfectly for the scene where Doc Brown is shot and Marty tries to escape from the Libyans by using the DeLorean. The thrill of Skateboard Chase brings back memories of Marty being chased by Biff and his goons against instantly recognisable rising trumpets and whirling buildups.

The ruthless 10 minute epic of It’s Been Educational / Clock Tower, details the scene where the Doc tries to connect two wires before lightning strikes the tower to help send Marty and the Delorean back to the future. Here, the frantic nature and settled moments of the score perfectly capture the heart-in-mouth action of the scene as well as the steadily building friendship that has grown between Doc Brown and Marty, leading to the fantastic conclusion. Breathless stuff.

Regarded as one of the greatest science fiction movies of all time, the accompanying score needed to be as epic as the movie, and it was. This masterful score has been captured on vinyl in a delightfully original package that is a must for any Back to the Future fan. It shows off the fun and frantic attitude of the movie amongst some gorgeous artwork and vinyl that has been beautifully pressed to match.