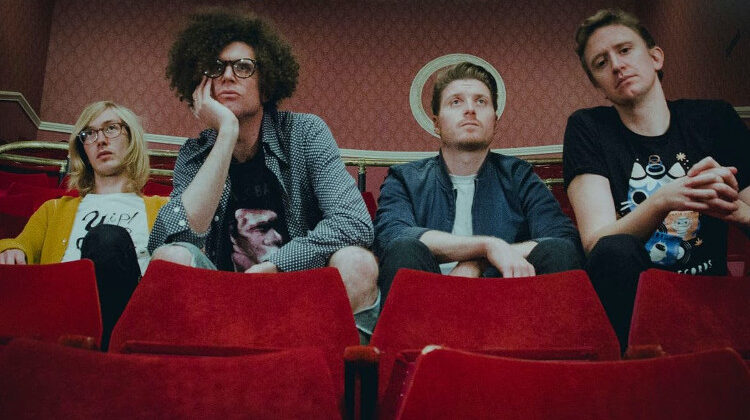 Asylums frontman Luke Branch speaks to Victoria Pearson about the adaptiveness of the music industry during our current pandemic, mental health, and their new album.

Southend art-rock group Asylums have recently released new album Genetic Cabaret and feel like they’re in a really good place. This may be surprising considering the year we’ve all had, but it’s allowed the band members to all reflect on where they are as a group and allowed them, most importantly, to progress musically.

Steve Lamacq has said that you are all of Rock and Roll culture in a microwave oven. What are the influences for the band both in music and culture generally?

Yes, a bit strange but nice!

LB: I think that’s Steve’s journalism past coming out. There are a lot of influences. We are massive cult music fans. We are all very different people and all have very different tastes in music. We love cult music like Throbbing Gristle and PJ Harvey but then, we like pop music like The Beatles, Bee Gees and ABBA. We love all that stuff as well. I would say our music DNA is the sound of cult music with the hook of Pop music.

LB: Correctomundo! You said it bang on!

What are your favourite tracks from it and why?

LB: Not to cop out but I like all the tracks from it for different reasons. For listening pleasure, I like The Difference Between Left and Right which is a harsh and severe tune. We all like that one but on a songwriting level, it’s A Perfect Life in a Perfect World and Platitudes. I struggled writing that one and had to keep on tweaking it and changing the keys. It seems like people have enjoyed that one the most out of all the singles we’ve released and I have talked about the labour that went into it. Those are my top three right now but that changes depending on the mood I am in.

What is Platitudes all about then?

LB: I don’t remember ever learning that word but I had it written on the wall while I was getting material together for this album. I started thinking about that word and I don’t think I even knew what it meant at the time I wrote it down. I looked into it and it seemed to fuse quite well with what was going on in the world at the time from the Government.  I was seeing a lot of platitudes in my feed, and in culture in general. There was also a simplification of complicated subjects and that is what the song is about in general. There is a sprinkling of literature in there as well such as JG Ballard and Crash, the book. We have just started a new creative attitude where we are writing loads of music. I’m also seeing my son more during the lockdown who is eight months old. That has been one of the upshots during this time.

Lockdown has brought people together in some ways. People shout out to me to say hello from across the road and this little girl always blows me kisses when she sees me.

LB: Aww that’s nice I like it when people say hello.

I was going to ask if your son has got a lot of hair but he’s a bit young yet.

LB: I have  a lot of curly hair and my wife has got red hair so I thought he might look like ‘Little Orphan Annie’

The album has been described as a pop at the establishment. Is it a demand for alternative culture?

LB: I don’t reject those ideas and I do appreciate people listening to the album on a personal level. The writing was a coping strategy as I moved towards becoming a father. Last year was difficult but that seems mild compared to what is going on this year. There was a polarization. I just thought that there was a lot of nastiness and the world that I come from, the art world, is not like that. The album is about what I have experienced in my life. It’s about going back and forth and my feelings towards all that. When I take songs to the band, they bring all of their emotions into it as well. There is a feeling of panic about the way that society is going and the record is about observing society and observing yourself and trying to work out where your feelings are between the two.

I love alternative culture and also recently becoming a father, it’s formed a lot of my life. Collecting records, comic books and films, poems and art,  all those things just mean everything to me. I am just looking to find a bigger audience, of course. Since the album has come out a lot of people have been calling us and offering us things. We do a radio show and that is a way of helping artists and alternative culture. We see it as art-culture rather than a business. We have been doing the record label for quite a time now and the radio show on Soho Radio is a by-product of that. I just try and put some positivity into the world, you know?

Your music has been played by Radio Six and Radio X and Kerrang. How did you come to their attention?

LB: We run campaigns and have different people to contribute to it. You need that because this game can be severe. Things can last a short amount of time and then fall apart and we have been doing this for six years. They generally care about all the people they are working with. We worried at the beginning of lockdown how we would put out records and if people would buy them. It would have been a lot easier to release the record when the virus was all over but we wanted to put our music out there now to lift people’s spirits.

I think you have to keep on rising above this situation.

LB: A lot of things have gone against us with the pressures of mental health, life in general and trying to do things in the arts. We have always tried to maintain a glass half full attitude. We don’t just look at it as a business. We decided to fly to America then make a record and then fly home. Is this the right thing to do during a pandemic? It felt like the right thing to do for now. We wanted to put it out when we intended to.

How does this album differ to your last album Alien Human Emotions?

LB: I think this album is slightly darker and edgier in terms of sound. The production was rawer and we did it with Steve Albini. We anticipated it to give the album what it needed. It is darker. I think the last one was our ‘mental health struggle’ album. We were all feeling quite low at the time. It was five years of trying to sustain a prolific release schedule with the band. With the changing nature of consumption and the lowering of incomes it felt like we were destroying ourselves to keep the band going. It was so difficult and this had filtered through, at the time, to our self-esteem. We went into all of this with our eyes wide open. We knew how it could be but we were just worn out by the end of all that. This new album has more energy in the tin and we are feeling more robust and energetic. We are ready to roll again!

I think a lot of your identity is wrapped up with your music.

LB: I think no matter what you do, you want to do a good job and be appreciated and we were and people came to the shows. We wanted to have a breather and get happier before we came back with the new album. I’m so proud that we paused for a few months. We were touring constantly and I needed a few lie-ins and a few runs! That was an important thing for us. We are still best friends and we might not have been if we had kept going in the way that we had.

I believe that what you put out there is what you get back at you.

LB: I agree and you don’t do the good things to get them back to you but I think that positivity breeds positivity. You have to have that glass half full attitude. We are part of this great culture and we are doing this with the band and the label (Cool Thing Records) and the radio show (Soho Radio).

I think it’s about vibrations. If you are in a particular vibration you will get someone who is on the same vibration as you are.

LB: Transcendental meditation changed my life. I have practised it by using mantra-based meditation. That helps with creativity and general well being.

Do you use videos for that?

LB: I did when I was learning. You are often encouraged to do it with nothing. There is a regular Thursday afternoon with Brian Eno which is a kind of tone which changes ever so slightly and has an optimism to it which changes the serotonin in my brain. The meditation brings down the anxiety and gives me perspective. I would encourage anyone to give it a whirl.

Sounds very hippy-ish. I have a tie-dyed cloth on my table aromatherapy oils. I think I am more of a hippy than you are. Can you tell me about the NME Home Sessions?

LB: They are stripped-down performances of songs for the NME. We have had to rearrange our songs quite heavily and they are usually meant to be performed with a four-piece band. We did it as a remote rehearsal on Zoom. We did have one rehearsal in a park. So it was nice to do some music for a change. It was nice just to see each other. On Monday it charted in the independent album releases and it’s just been a happy time, the last few weeks. The four of us are happy at the moment, just looking forward to making more music.

Finally, what else do you have planned for this year and next year?

LB: We’ve stop planning! We are just going to keep making music and helping other bands and look toward the future creating in whatever way we can. The Beatles took a live hiatus and so did R.E.M. They made some of their best record then, so maybe that is what we should do.

And The Beatles also did transcendental meditation, so that’s the connection! Thank you for talking to me today Luke, it’s been really nice to meet you.

LB: Yes and you too!

We have our vibrational energy up and everything!