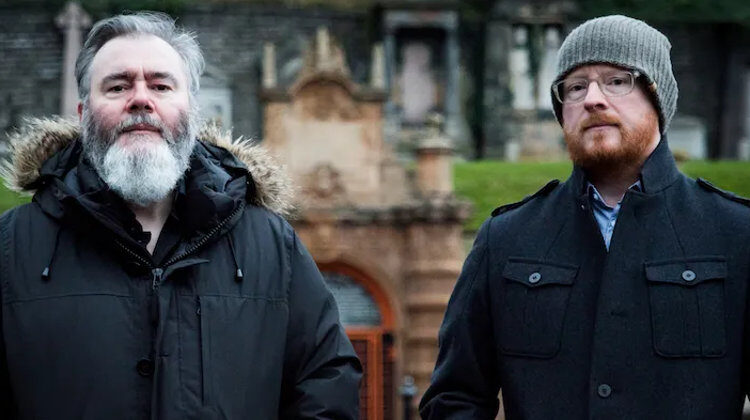 Arab Strap have returned to give us a dark, brooding album laden with complex subject matter and refreshingly original lyrics.

Sixteen years after their last record, Aidan Moffat and Malcolm Middleton, a.k.a. Arab Strap, are back, releasing their first studio album since their reform in 2016. In an interview with The Guardian last year, Middleton stated how “there’s no point getting back together to release mediocrity” – and it’s safe to say that this album is anything but mediocre. “It’s about hopelessness and darkness but in a fun way,” says Moffat, and he’s right.

The tracks are gritty and unapologetic as they address themes ranging from sex to addiction to racism using a combination of pulsing guitar lines and soaring strings. Moffat continues: “The general theme of the album is what people turn to in times of need, and how they can hide in the night.”

The record opens with The Turning of Our Bones, a song that draws the listener into a trance with its oscillating drumbeats, spellbinding strings and ominous-sounding chorus which is made even more authentic by Moffat’s semi-sung vocals. Meanwhile, the irregular beat and looping guitar in Compersion, Pt. 1 enhances the song’s candid lyrics: “I have seen all the ways your shrinking body works / The successes and the failures, all its kinks and quirks / I’ve smelled its every scent, I’ve heard it’s every sound / Now open up your heart if there’s enough to go around.”

Perhaps the bleakest track on the album is Tears On Tour, with synthesisers that are just as mournful as the lyrics: “What would you call the opposite of a comedian? / Whatever it is, that’s what I wanted to be … The audience would join me in a long collective cry / We would all weep together as one.” Elsewhere, Kebabylon hits us with wailing, winding saxophone lines after the chorus, a little reminiscent of that in David Bowie’s Dollar Days, and the strings make their finest appearance in I Was Once a Weak Man, which has a slightly different atmosphere compared to the rest of the tracks.

Musically, some of the songs in As Days Get Dark do occasionally risk blurring into one another, but the lyrics stand out enough to make up for it. The album is certainly dismal, but in a way that will make listeners want to listen to it more than once.