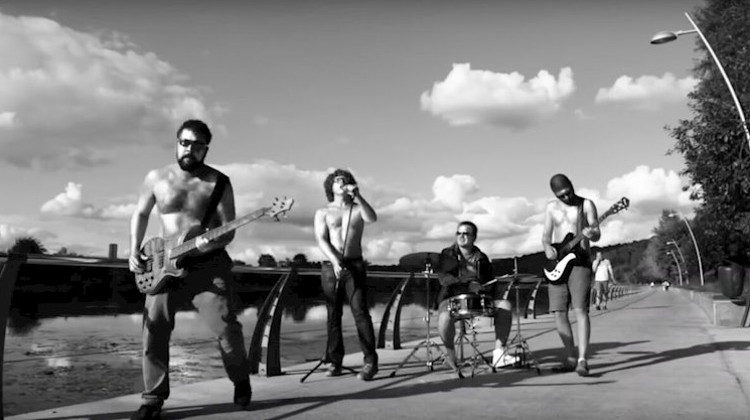 Ilya & Vladimir from Russian rock band Apache Rose chat with Victoria Pearson about their new single, the ecclectic Russian music scene, and their hopes for the band’s future.

Combining sounds ranging from British Invasion music of the 60s and alt-rock bands of the nineties and noughties, Russian-based Apache Rose are something of a pleasant oddity. With a growing fanbase, steady radio play and new music on the way, we speak to Illya and Vladimir from the band about their increasing appeal and what the future holds.

So, you guys are calling me direct from Moscow?

I’m glad you are the real thing! Let’s delve into the questions: Do you agree with the statement that you are Russia’s answer to The Strokes?

Ilya: That would be very flattering! You could say we are Russian’s answer to any Rock band from the west because we are much more Western than Russian.

So what are your music influences? What Western bands do you like the best?

Ilya: We have lots of different influences. I will talk for myself and Vladimir will talk for himself. In terms of decades… for me in the seventies, Aerosmith and from the eighties it’s Guns and Roses and Metallica. The nineties, of course, it’s the whole Seattle scene. Those are the pillars of my three inspirations.

Vladimir: For me, it’s much simpler. Everything I like boils down to three bands: The Beatles, Led Zeppelin and King Crimson.

Okay, that’s very definitive then. What is the Russian music scene like? Do you get much Western music over there?

Ilya: In terms of what people are listening to, a lot of people are listening to Western music and that started back in The Seventies. A lot of vinyl came from the west and it was more or less illegal. But in terms of what is being played, it’s really different. You know, maybe Vladimir will contend with me here but there is not a lot of Western sounding bands in Russia and if there are, they are more or less underground. Russian rock likes a specific sound. Vladimir is more experienced on that because he has played with lots of top Russian rock acts.

Vladimir: Well, I tend to agree because there is such a thing as language first of all, and of course most of Russian music is Russian language. English speaking and English singing rock is really actually more or less underground, here. But that doesn’t mean there isn’t anything interesting happening because there is. It’s pretty inventive and it’s more daring as music. So there are things happening on the English singing rock scene in Russia but it looks like not many of them really want to go out somewhere, out of the underground. That is an interesting phenomenon.

Yes, and I think a few Western acts have played in Russia? I think Billy Joel did at one time?

Ilya: Yes, Billy Joel did and also Elton John was one of the first artists from the west that played Russia.

I didn’t know he had done that.

Ilya: In terms of touring, Russia has become a destination for a lot of Western acts. I have seen Aresomith play three times since 2007 and Metallica has been here also three times. So big acts do go to Russia and put Russia on the map and most of the time if they play Europe, Russia is on the itinerary. It’s still a little bit far for acts to travel and only top acts can get to Moscow because, commercially and in terms of touring, it’s a very expensive leg of the tour to go to Europe and then back to Moscow.

That’s interesting I didn’t know Aerosmith had been to Russia?

Ilya: A lot of bands that tour Russia are bands like Deep Purple. Nostalgia! A lot of people that grew up in the seventies and eighties listen to these bands and they come back every month or every year. They have a very loyal following.

Who is the biggest band in Russia, would you say?

Ilya: I would say it’s a band called Leningrad; they are sort of like a Ska, Funk, alcoholic band… that is their image.

Ilya: Yes, they have a hoarse, whisky voice singing about a lot of drinking and things like that. They are the only Russian band that sells out the stadium.

Your latest single is called On My Watch. What is it about?

Ilya: The words came naturally but basically, it’s about being a band coming from the bottom and aimed at making it. That feeling of really wanting to get to the top.

Okay, so it’s all about ambition?

Ilya: Yes, so that on my watch I am just going to be the best and the people are going to go crazy.

Okay now, why is the band called Apache Rose?

Ilya: That’s sort of like a tradition when you take the band name from a song that you like. For example, in this particular case, there is a song called Apache Rose Peacock by ‘The Red Hot Chilli Peppers’. it’s one of my favourite songs. It’s a title with certain contradictions and it’s good sounding. It can be interpreted as soft and hard – Apache and Rose. We did get some heat sometimes from American listeners because they think this is an appropriation of Apache Indian American culture and we have to view this on our Facebook page sometimes.

Yes, I know that song by The Red Hot Chilli Peppers. I like that one. Now, what is the song Blind Spot about?

Ilya: There are two meanings. One is very literal. You are in a Taxi and it is very dangerous and there are various blind spots. The second meaning is more general about putting yourself in situations where you don’t control things and you would like to get out of it. Something like that.

What is the best show you’ve ever played and why was it so good?

Ilya: You know, the funny thing is we are a new band and so this was more of a studio effort. We started actually just before the virus lockdown. As soon as the lockdown is over we are going to start doing shows.

Do you have an album or an EP coming out?

Ilya: We have material enough for two albums at least and the plan that we have is putting out an EP possibly. We are hoping this will be in the next couple of months in late August or September and release some singles. We are gradually narrowing down the process and going faster and faster.

If you could perform with any artist living or dead who would you choose?

Ilya: I think I would choose someone like The Sex Pistols.

I have interviewed one of The Sex Pistols, Glen Matlock!

Wow, that is cool.

Vladimir: I think it would be Led Zeppelin

What are your plans for the rest of the year?

Ilya: The plan I think will be the EP this year and then another EP in 2021. We are hoping to do a lot of touring including coming to the UK. We have had people on our Facebook page asking us to come to the UK. I am not sure how serious that is but we hope we can organise a tour to Europe and the UK.

New single ‘On My Watch’ is set to be released in early August. Check out the video to Blind Spot below.