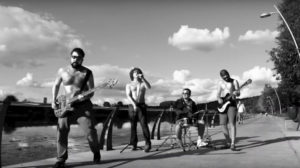 Ilya & Vladimir from Russian rock band Apache Rose chat with Victoria Pearson about their new single, the ecclectic Russian music scene, and their hopes for the band's future.  Combining sounds ranging from British Invasion music of the 60s and alt-rock bands of the nineties and noughties, Russian-based Apache Rose are something of a pleasant oddity. With a growing … END_OF_DOCUMENT_TOKEN_TO_BE_REPLACED