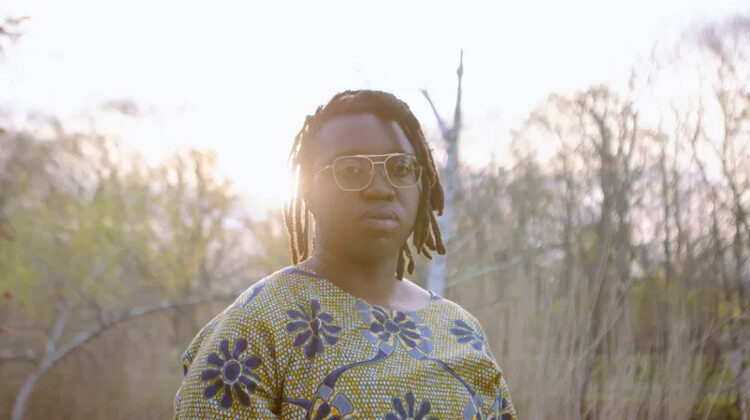 Boston-based indie-folkie Anjimile delivers pride, contentment and self-assurance in spades on their official full-length debut, a cohesive and finely engineered opus which cultivates strength from grief and self-discovery.

The Boston-based, Texas-raised singer-songwriter Anjimile Chithambo’s sumptuous album, Giver Taker, was constructed in the wake of emotional torment after battling with drug and alcohol addiction, a dysfunctional relationship and coming out as queer to their conservative, Presbyterian parents. Non-binary and trans, the twenty-seven-year-old wrestles with and processes their demons, emerging the other side with a resilience and a calming profundity that’s infectious and life-affirming.

The heart-wringing 1978 begins as stark poetic confessional  – “Give to me mother’s trust/I’ve never seen her face/But I think she looks like us” – and erupts in a breathless surge of giddy orchestration that sucks the listener in with its delicately crushing sentiment: “I am ashamed of the awful things I have done to you.”

Comparisons to the intimate warble, woody instrumentation and religious imagery of Sufjan Stevens are inevitable, though palpable echoes of Moses Sumney and Tracy Chapman abound and certain cuts (notably the Shakespeare-quoting Ndimakukonda and the graceful mantra that is Maker) come subtly laced with brooding polyrhythmic pulses that pitch closer to 1980’s African pop.

Grave matters of identity, grief and torment reside at the heart of Giver Taker: Maker garners an emphatic lyricism from the clash between their trans identity and their parents’ religious orthodoxy, whereas the entire record acknowledges the universality and inevitability of mourning whilst connecting it to rich possibilities of wonder and re-birth. The album’s title itself nods towards the duality of existence, accepting that life accommodates both pain and joy, death and re-birth.

Anjimile’s penchant for poetic expression and potent metaphor reaches a soul-stirring apogee on the finger-picked, tumbledown folk of Not Another Word: “I came howling after God/Won’t you set things right/Mend my mind, untie my knot/Calm me through the night.” Elsewhere, the soothing title track weaves in plaintive piano keys and To Meet You There finds dream-pop wings as it examines mortality: “After death/After life/I was up/Half the night/Hurricane/Never came/Not for me/Not again.”

Despite having released a series of records during the past decade, Anjimile considers Giver Taker to be their debut proper; it’s an accomplished and inquisitive album that radiates personality and vulnerability through cathartic storytelling and never outstays its welcome.